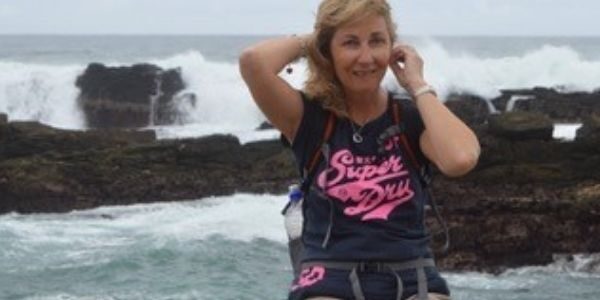 Girl from Perth found home and a varied career as a mental health nurse and team manager in Banbury.

The word ‘fortunate’ comes up a lot when Angela Brown reflects on her over 30-year career at Oxford Health. She feels she has been fortunate with fellow students back in Scotland; with colleagues in Banbury and further afield; with secondment opportunities, and the many patients she has cared for and got to know over the years. On Sunday, November 7, this Team Manager for Older Adult Community Mental Health Teams will officially retire.

Angela has worked in the Trust since 1989 after she qualified as a mental health nurse in Scotland. But it was almost by accident this became her professional path.

“At school I didn’t really know what I wanted to become,” she says.

“I come from a family of nurses, and people said, well, of course you are going to be a nurse, or of course you will not be a nurse. I thought, well, I’ll apply: you don’t know if you like something unless you try!

“But I couldn’t get into general nursing; there was a massive waiting list. So I tried mental health nursing, and I just loved it. I never went on to do general nursing.”

Thinking back, she says:

And has she achieved that?

“I look back now and I think, oh gosh! You’re dealing with such sensitive issues, and I really didn’t have a lot of life experience myself. I was only 19 when I went into nursing.”

Angela hails from Perth and did her training at Perth College of Nursing and Midwifery. She came to Oxford because it was always her plan to experience a different place – and Oxfordshire is where she has stayed.

“I hadn’t really travelled much at that time, just to London a couple of times with my parents. I remember thinking, oh, Oxford isn’t as big as I thought it was going to be. It felt like a home from home.”

Angela’s first job in Oxford was as a staff nurse with older adults at what was known as Hurdis House on Manzil Way.

“I always wanted to work with working age adults so when I heard of a position in Banbury, I applied for that,” she recounts.

And that’s where she has been since then, except for secondments she took to expand her experience, and when she had her daughter Amy, now a grown-up.

“There were opportunities to get promoted and I was at the right place at the right time. It is funny really – when we were qualifying, I remember there was a questionnaire ‘where do you think you’ll be five years’ from qualifying’, and I jokingly put down ‘ward manager’ – and I think it even happened a bit before that. But I think I was ready for it, and I enjoyed it enormously. “

Eventually Angela found her place in community mental health. She enjoys meeting people at their home and working alongside them and their families.

In terms of career highlights, Angela picks up working with people who have complex needs.

“I’m really grateful I’ve been able to do that. I always try to promote the idea that just because people are challenging, we shouldn’t deprive them of care. These days, I feel clinically this is the area where I’m strongest; where my expertise lies,” she says.

Although a lot has changed in Oxford Health in 30 years – size, the range of services, specialisation – some things remain the same, Angela believes.

“Good clinical practice, being able to connect and work alongside people, make them feel safe; all the basic things that people need to be able to build that relationship and move forwards – you know, none of that has changed, and I think that’s the thing, isn’t it?

“You know, you could go and do all the training in the world, but actually, as a colleague once said to me. if you’re not able to get a foot in that front door and past the front door to start building up that relationship with somebody, you’re not going to find the opportunity be able to help.”

“Angela has shown her dedication to the Trust and as a mental health nurse with a clear focus on patient care and advocating for patients’ need, working at improving quality of care and supporting the wellbeing of staff within her teams.

“We would like to thank Angela for all her work in the Trust and wish her the best for the future. Spending some time with family and friends, travelling and having extra time with her beloved dog Marvin.”

But curious and keen to learn as that 19-year-old in Perth, Angela is entertaining some new adventures, too.

“In the past I’ve done some dinghy sailing, and really enjoyed it. Then a friend did clipper yacht training. Apparently after that you can sail pretty much anything, so I’m thinking of taking up that.”