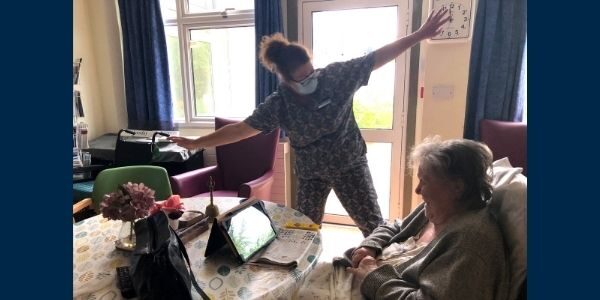 “It’s about more than the movement,” says the dancer and arts co-ordinator

Angela Conlan, Oxford Health’s arts co-ordinator and lead for the Creating with Care programme, has been nominated for the One Dance UK Awards 2020 in the Dance for Wellbeing category.

The award celebrates the work of dance professionals who are promoting and supporting health and wellbeing through dance, says One Dance UK.

“This professional will be using dance to improve the physical and/or mental health and wellbeing of particular groups or communities, for example those with dementia or Parkinson’s, the elderly, children and young people, or people with mobility or accessibility needs.”

This is precisely what Angela, a dancer by training, has been doing in Oxford Health’s community hospitals, amongst many other creative activities she has been producing in collaboration with local artists.

“Before the COVID-19 pandemic I was running dance groups which I obviously can’t do now,” she says. 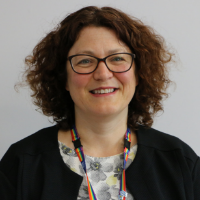 “Now I have been doing one-to-one sessions, even if it just means listening to familiar music and tapping your toes. Or I might suggest we do some of the exercises a physiotherapist has given to them – obviously the safe ones!”

Angela knows that for many people the sessions are about much more than just movement.

“One lady told me how she had met her husband-to-be. She had been skipping her piano lessons so that she could be with boyfriend. The first her parents knew about it was when her teacher called them and told daughter hadn’t shown up at lessons at all. She chose a piece of music that remined her how she had danced with her husband and we moved a little bit to that,” Angela tells.

“So, it’s about more than just movement. It’s about the music and the stories that music evokes, and how it takes people’s mind off from being at hospital at the time.”

“It’s been particularly good at the time when people haven’t been able to have visitors. They have been very lonely, and even now when visitors are allowed again, it is not very many. So, it’s nice to be doing something little bit different.”

In the picture above Angela is dancing with a patient at Witney Community Hospital.

“It was part of a project with a live virtual musician Kate Wilkinson on the iPad with me dancing with patients at the same time,” Angela says. “The musician was supported by Creative Dementia Arts Network.”

Many things at work are different for Angela, too.

Angela is delighted by her nomination.

“It’s nice to be appreciated for the work you do – and loved, I think,” she says. As a passionate advocate of dance and other arts in health, she is also pleased for the industry and all other dancers.

The shortlist will be announced in early September. You can see more about the awards here.