An app led by Oxford Health public health nurse to facilitate discussion about female genital mutilation (FGM) between health professionals and the people they serve is currently being tested across Oxfordshire. 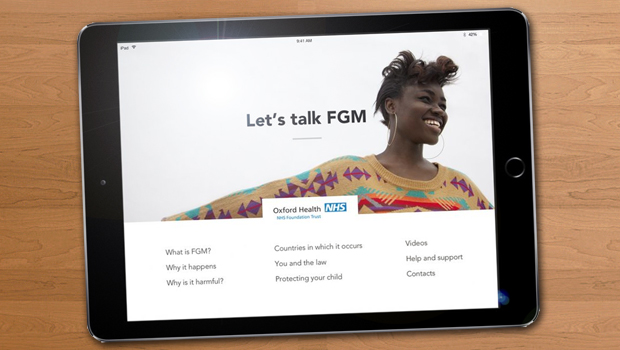 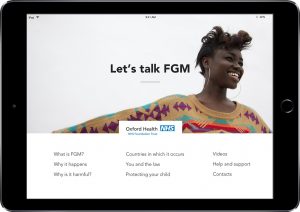 An app to facilitate discussion about female genital mutilation (FGM) between health professionals and the people they serve is currently being tested across Oxfordshire.

The project to produce and test the app is led by Joanne McEwan, a public health nurse at the Oxford Health NHS Foundation Trust. Joanne regularly came across survivors of FGM during her work as a health visitor in Oxford.

FGM affects approximately 137,000 girls and women in the UK, although actual numbers are unconfirmed.

Joanne said: “Good communication and an understanding of the cultural and language differences are critical factors for health professionals if they are to win the trust of their clients and patients.”

“FGM is a very sensitive subject, and a health professional can find it difficult to open up a discussion in case they alienate their client.”

Responding to these difficulties, Joanne led the development of the Let’s Talk FGM app at Oxford Health NHS Foundation Trust. The iPad app is currently being tested by 400 of the Trust’s health professionals and community outreach workers across Oxfordshire.

Health professional use the app in their sessions, to help them to enquire sensitively about FGM, identify girls at risk of cutting and direct FGM survivors towards care and support.

Joanne won funding for the project via the Mary Seacole Leadership Award, which recognises outstanding work in the in the BME (black and minority ethnic) community.

She then worked with the local campaign group Oxford Against Cutting, as well as Oxford Health and Oxford University Hospitals NHS Trusts, to put together the content for the app, developed by the Oxford-based digital agency White October.

The app’s content includes soundbites of key information in five languages about the impact of FGM, why it happens, the law and how to protect children, as well as providing local support for survivors.

Nia Fekri, a student from Oxford and a founder member of Oxford Against Cutting, said: “I’m of Iranian descent, and though FGM is mostly restricted to rural areas in South Iran, my mother joked about just what my grandmother would have thought about me discussing FGM openly. Even though it was just a joke, it made me realise just how much of a taboo it still is to discuss FGM.”

Nia is one of the campaigners from communities at risk of FGM featured in the app’s video interviews.

Joanne said: “This resource will give health professionals the information they need, and therefore build their confidence, to clearly explain the issues around FGM in the client’s cultural context.”

“It is designed essentially as a client-led communication tool which does not contain any client/patient data. My aim is that it will remove uncertainties, providing practical and current guidance for both clients and professionals.”