More appropriate care for those in crisis 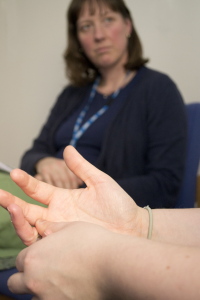 The Street Triage project across Oxfordshire is now 11 months into its pilot year. Thames Valley Police is working in partnership with Oxford Health NHS Foundation Trust in a one-year Street Triage Pilot, funded by the Department of Health. The aim of the pilot is to improve the overall experience and access to appropriate care for people experiencing mental illness who call the police when they are in a crisis state.

In Oxfordshire, there are currently two mental health professionals working alongside police officers between 6pm and 2am, seven days a week. The mental health professionals are there to attend incidents with police officers so they can offer face-to-face advice, make accurate risk assessments and give the right care to the patient. They have also been working in the police enquiry centres, offering advice to the police call handling staff and are able to talk to the person in crisis over the phone. A 24-hour advice line has also been set up to assist police officers with any mental health-related incident outside of Street Triage hours.

The mental health Street Triage Pilot in Oxfordshire has been effective in finding less restrictive alternatives to the use of Section 136. S136 is a power available to police where a person found in a public place with a mental disorder who is in immediate need of care or control may be detained and removed to a place of safety in their own interests or that of others.

This project aims to avoid using custody as a place of safety and reduce the amount of time police officers spend on mental health incidents.

So far we have seen:

All of this means that mental health patients are receiving an efficient response which is more appropriate for their needs.

“The process allows for people who are clearly unwell to be dealt with through appropriate care pathways rather than been taken into police custody which adds to their worries and issues.

“In addition it has allowed for a greater knowledge and understanding of what our colleagues within the NHS do and improved our working relationship which benefits everyone including, most importantly, service users.”

Consultant psychiatrist and clinical director Dr Rob Bale said: “Our mental health nurses are trained to assess situations when people are in distress or in crisis to ensure they get the right care as soon as possible. Working alongside our police colleagues, we are now ensuring many more people get the urgent support they need at the earliest opportunity. This project has resulted in major benefits for the police and healthcare, but most importantly people using mental health services.”

Assistant Chief Constable Alan Baldwin said: “I am delighted that our Street Triage pilot in Oxfordshire is delivering such good care to those in need. The Street Triage team has made a significant impact by putting the needs of the person at the heart of the service, proving that by working in partnership we can find more appropriate pathways for those in crisis.

“There is a developing understanding that those experiencing a mental health crisis do not belong in the custody of police officers and should not be held in police cells. The evidence is clear; there have been 25per cent fewer deprivations of liberty under section 136 and a reduction of 68per cent in the use of police custody since January this year. In addition service user feedback has been overwhelmingly positive.

“There is still some way to go to resolve issues at a local and national level. Recognising this, and in line with our commitment to the Mental Health Crisis Care Concordat, I am committed to developing our Street Triage partnership in Oxfordshire and keen to extend it to other areas within the Thames Valley.”

Care minister Norman Lamb said: “The street triage schemes find ways for mental health services and the police to work together to provide better care for people in mental distress. It is fantastic to see the success of the Oxfordshire pilot.

“But there is still work to do, which is why we’re introducing the first waiting time standards for mental health services and I’ve asked every local area to sign a declaration to improve crisis care by the end of this year.”

Trust is the most active workplace in Oxfordshire!

Minister for Care and Support hails TalkingSpace an “inspirational” success.

Better Health – let’s do this Oxfordshire!

Stay alert as Covid cases on rise in Oxford