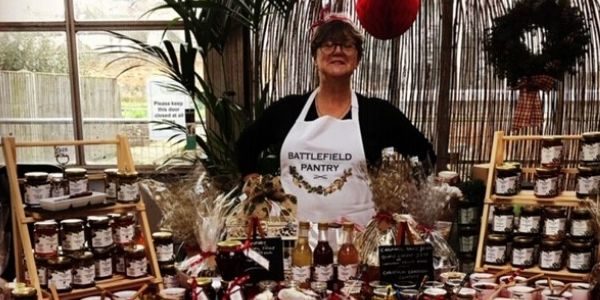 Battlefield Pantry goes to the front line in Abingdon

Abingdon Emergency Multidisciplinary Unit (EMU) were in for a sweet and spicy treat when they received a gift from Battlefield Pantry: jam, chutney, elderflower cordial and laundry bags, all home-made by Sharon Garrod (pictured above.)

She is the lady behind Battlefield Pantry, a company she runs from her kitchen in the hamlet of Warpsgrove in Oxfordshire. The name of her business comes from the name of her house, Battlefield Manor, which was built on the site of the Battle of Chalgrove during the Civil War.

Sharon was initially asked to make some laundry bags and headbands by somebody she knew and got the inspiration to do more.

“Both my husband and son are in the at risk group, so we have been in the lockdown since March 12,” she tells.

“I used to be a nurse and I feel like I should be back there – but my registration is out of date and two in my family are vulnerable. It’s one of those real questions you ask yourself. But I felt I’ve got to do something.”

“Before the lockdown I had all this stuff – jams, chutneys and cordial – which I sold in craft fairs and supplied to local pubs and delis. I thought: what’s next? My next event would be in September but the last thing I want to do now is to stand two feet away in some fair talking about my products,” she tells.

“I’ve seen pictures in media of fruit baskets and cakes in the staff rooms, and well, everyone likes jam. So, I decided to give my stock to the Abingdon team,” she laughs. 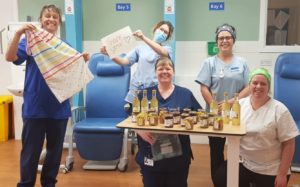 Sharon sources all her produce locally and forages hedgerows for wild ingredients like blackberries and elderflowers. She loves trying out new recipes and her clientele also suggest new flavours. Current favourites are ‘plumbal’ which combines plums and balsamic vinegar, and hot chilli jam, which comes with a warning.

At the time of our phone interview Sharon was in the middle of making some blackcurrant jam for ‘friendship boxes’ that are delivered once a week to elderly residents in the neighbouring villages. Next in her list is going to be rhubarb jam – it’s the season.

So, does Battlefield Pantry have a special recipe for the lockdown and the front line?

“Well, everyone wants to eat something,” she has noted. “I’ve been doing lots of healthy snack bars with cacao, coji berries and coconut oil – something healthier than biscuits.”

Our EMU team were very happy with their gift: “Wow, what an amazing lady Sharon is. Thank you so much!”