Benedict and the waves

Oxford Health speech and language therapist is racing in the over thousand kilometre Fastnet Race. 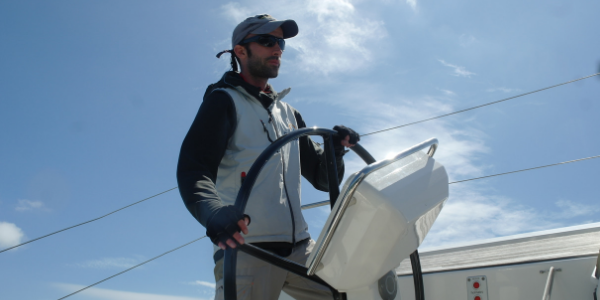 In Oxford we are about as far from the sea as it is possible to be on this island, but that doesn’t stop speech and language therapist Benedict East spending pretty much all his free time doing what he loves best: sailing.

This weekend Benedict is heading south to join the crew on the yacht Simples which is competing in the famous Rolex Fastnet Race 2019. Some 350 boats are taking part in the race which runs from Cowes, just off Isle of Wight along the English coast and around the Fastnet Rock in Ireland, back again and finishing in Plymouth. The route is 605 nautical miles, just over 1,120 kilometres.

“This is not the first time I have done this race, but it is certainly the nicest boat that I have competed on,” says Benedict of Simples, an XP44 – a 44 foot long yacht. 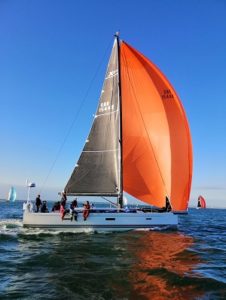 Simples yacht in all its glory.

Sailor since age of eight

Benedict grew up in London and started sailing at the age of eight on family holidays in Cornwall where his mother is from.

“We were sailing on little dinghies, just for fun,” he said.

“Then when I was at university, I took part in a paid-for weekend on a corporate yacht. It was quite funny because all the others were city bankers and then there was me. But it sparked an interest in bigger boats”, Benedict said.

He joined the university sailing team, started getting into crews and did – and does – a lot of racing. He has clocked up some 15,000 nautical miles (27,000 kilometres) in all kinds of seas in most parts of the world. The strongest gales he has raced in are force 10. To give you an idea, force 12 is hurricane (Beaufort scale.)

In the Fastnet Race every member of the crew of 12 has their primary role and a secondary role. Benedict’s main duty is the pit, or snake pit, so called because it holds the ropes.

“The pit is situated in the middle of the boat and I control all the lines that go to the top of the mast and are involved in hoisting and dropping the sails. We have 10 sails on board for the race, but will only fly a maximum of three sails at any one time. I am also part of the communication chain for passing information from the front to the back of the boat and on. My secondary role is helming – steering –  the boat,” Benedict reported.

“We work the boat in a rotating shift pattern where four people are on watch, actively racing the boat, three people are on standby for cooking, cleaning and ensuring that the crew on watch has all they need and can support at times when more people are needed on deck. Four people are down below, sleeping. This leaves the navigator-tactician out of the watch system so that he can oversee the progress of the yacht, to be on hand at points of tactical need or sleep at times when we’re just following a course.”

If that doesn’t sound like everyone’s idea of a holiday, just getting qualified for the race is demanding. Half of the crew must have competed together, at least 300 nautical miles in that season, on the same boat they race in the Fastnet. And even that doesn’t guarantee an entry: the race is hugely popular.

“The places were sold out in about five minutes of opening this year,” Benedict said.

So what is it that Benedict loves about sailing?

Sailing through night and day in all kinds of seas he has seen comets, blood moons, algae reflecting light (phosphorescence) and of course, billions and billions of stars because at sea there is no light pollution.

“But I am also an individual in a team. Sailing is a great leveller. In our team we have students, public sector workers and city bankers but on board all that disappears. We support and trust each other.”

Not in it for the trophies

Simples skipper Demien Smith and his crew are expecting to finish the race late on Tuesday or early on Wednesday, depending on the wind.

“We certainly won’t be the fastest but also not the slowest either,” said Benedict.

“We are competing within our class (IRC 1) rather than in the whole race and are aiming to be in the top third. There are five other boats like ours, XP44s, and we would certainly like to be on par with them”, said Benedict of the crew’s ambitions.

As for prizes, the Simples skipper has promised to open a bottle of rum when they pass the halfway point, the Fastnet Rock, in Ireland. In the whole race the first past the finishing line will get a Rolex watch. Then there are other trophies, a polo shirt and mementoes.

“But I’m not in this for the prizes”, Benedict laughed.

“The skipper is fiercely competitive. I am too, but I don’t even mind where we come, or the time taken as long as we finish the race.”

You can view a video of the race on the official race website.

You can also track the fleet and individual yachts.

“Of all the races that I have done, this one was probably the one that I have found easiest, he said.

“I say that based on the fact that I knew the boat, I knew the skipper and the crew and I trusted the gear and maneuvers that we were doing. It was a hard race and it took a few days to fully recover. I’m glad to have done it on this boat with this skipper, as I know that he has other races in mind to compete in that I have not yet done, including Middle Sea Race, Sydney Hobart Race and Newport-Bermuda Race.”