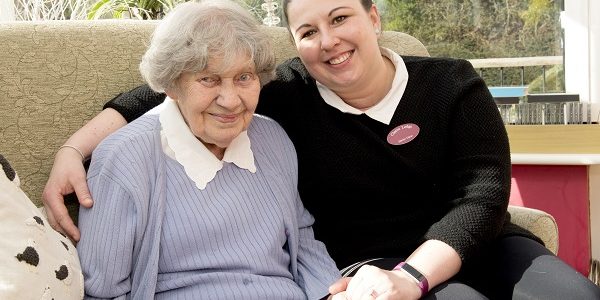 A recruitment drive to encourage more people in Oxfordshire to consider a career as a care worker has attracted more applicants in just five months as in the previous two years.

The joint campaign – ‘Make a difference every day’ – features a number of real life care workers, already supporting people across the county, talking about the rewards of the job and why they would recommend the job to others.

The  campaign was jointly run and funded by the Oxfordshire County Council, Oxford Health, Oxfordshire Clinical Commissioning Group and Oxford University Hospitals NHS Foundation Trust (OUH) in partnership with the Oxfordshire Association of Car Providers (OACP). The county’s residents have also seen advertising on buses and billboards, on local radio and at face to face events such as careers fairs.

Figures show the OACP website received 84 applications for a variety of care work roles between mid-November 2017 and the end of March 2018, compared with 66 applications in the two years between November 2015 and October 2017.

107 new job seekers registered on the site between November 2017 and the end of March 2018, compared with 101 from October 2015 and October 2017. And around 130,000 people have looked at recruitment adverts on Facebook since the ‘Make a difference every day’ campaign launched.

Oxfordshire currently has around 14,200 people working in adult social care. But the county’s ageing population is growing at twice the average, so there is an urgent need for more caring, friendly and reliable care workers to support older, frail people in their own homes, in nursing and residential homes or in community hospital settings.

“Compassion, patience and a sense of humour”

Care workers help people with personal care like washing and dressing. They also prepare food, feed people and give out medication. Some care work involves carrying out more general tasks like housework, laundry and shopping. Care workers may also help people manage their money, pay bills and write letters, or support families to get used to new caring responsibilities.

Ladislava Smela, aged 35, a senior carer at the private Cleeve Lodge Residential Care Home in Goring-on-Thames, said: “To be a care worker you need to have compassion, patience, a sense of humour and the willingness to learn new things about people and yourself. The most important quality is the ability to listen to residents and also colleagues as team work is vital for providing a good service.”

Lilian Thomas (pictured with Ladi), aged 89, has lived at Cleeve Lodge since January 2017, and has grown close to Ladi. She said:

“Ladi has been so kind. One of best qualities is that she listens to people at the care home. Ladi’s taken me out to various places which I really enjoy, especially the visit to a local school where I talked to the children; it was such a lovely day and brought back a few memories of my time working as a cook in a local school.”

Ladi said: “I enjoy caring for Lily. She is always very kind, and appreciates the things you do for her. She is one of the nicest ladies you’ll meet and is very caring; she worries more about other people than herself – Lily makes my job that much easier.”

Sharon Chandler, aged 44, is a health care assistant for Oxford Health Foundation Trust, based mainly at Wallingford Community Hospital. She said: “I became a care worker as I felt I had something to give to people, to help them. And, I quickly realised in my first job – which I loved – it was a role for me. I have worked in different jobs as a care worker over the years but in all of them I have really enjoyed the interaction with patients.”

Anita Crook, aged 46, is a Trainee Assistant Practitioner for Oxford Health Foundation Trust and is based at the NHS Fiennes Centre in Banbury. She said:

“I really would recommend this job to other people because I’m not stuck in an office and I have a great deal of autonomy to carry out my varied tasks as part of a hard working team. In this job you get back what you put in which for me is a great deal of satisfaction.”

Rumi Mohideen, 51, is a health care assistant, for Oxford Health Foundation Trust since 2014. Currently, he is based at the Warneford Hospital in Oxford on a mental health ward. he said: “My current job is very rewarding especially when I see my patients recover from illness and leave the hospital not wanting to harm themselves. My job is not about money, even though it helps to pay the rent. For me it’s about the enjoyment of working with patients and my colleagues.”

Anyone interested in applying for care work vacancies in Oxfordshire will be encouraged to visit the OACP website which hosts a range of vacancies, both in the NHS and with private care companies.

July 26: COVID-19 info: Get a first or second vaccination, walk in clinics, getting tested and staying safe