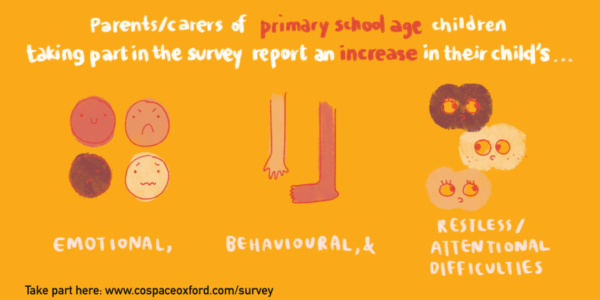 Parents and carers of children aged 4-10 years of age reported that over a one-month period in lockdown, they saw increases in their child’s emotional difficulties, such as feeling unhappy, worried, being clingy and experiencing physical symptoms associated with worry.

Early results from the Co-SPACE study, which asks parents and carers about their children’s mental health through the COVID-19 crisis, show:

More than 10,000 parents have now taken part in the Co-SPACE (COVID-19 Supporting Parents, Adolescents, and Children in Epidemics) survey led by experts at the University of Oxford.

Prioritising the mental health of children and young people throughout the Covid-19 pandemic and beyond is critical. These findings highlight that there is wide variation in how children and young people have been affected. Some sources of variation have been identified, but we need to continue to gain a better understanding of which families are struggling and what they need to help direct the right advice and support going forward to ensure that this does not have long-lasting consequences.

Perhaps surprisingly, the same pattern was not seen in the older age group of 11-16 year olds. Teenagers themselves reported no change in their emotional difficulties between the two time points and their parents and carers reported that they felt that their child’s emotional difficulties had actually improved. Neither teenagers nor their parents reported any changes in their behaviour over this time but parents felt that their children were more restless and had more difficulty concentrating over time.

The Co-SPACE (COVID-19 Supporting Parents, Adolescents, and Children in Epidemics) survey is still open for parents and carers to share their experiences www.cospaceoxford.com/survey. This research is tracking children and young people’s mental health throughout the COVID-19 crisis. Survey results are helping researchers identify what protects children and young people from deteriorating mental health, over time, and at particular stress points, and how this may vary according to child and family characteristics. This will help to identify what advice, support and help parents would find most useful.

Further Co-SPACE updates can be found online at Emerging Minds.