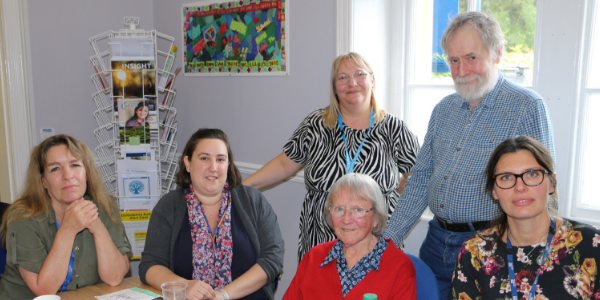 Coffee, cake and getting connected

Carers Week at Oxford Health ended on Friday with a carers’ coffee morning at the Community Hub at Warneford Hospital.

“It is lovely to come to Warneford as a carer for something so nice!” said Pat Ross, who was enjoying coffee, cake and chat with fellow guests and Oxford Health hosts (above, from left sitting: Rosamund Forbes, Julie Pink, Pat Ross and Diane Hilson, and standing Julie Males and Stephen Hughes.)

Pat has been a carer for her son for 37 years. On Wednesday she gave a talk about her journey earlier in the week at the Annual Carers’ Conference in Didcot.

“The biggest change in my time as a carer has been how services have opened up to us carers,” she said. “In the old days, when I started, no one would even speak to me.”

Despite Pat seeing great improvement over the decades, communication between family and health care professionals is still one of the biggest challenges that Julie Males comes across in her work. She is the service manager for Oxfordshire Carers Support Service, which is run by the charity Rethink Mental Illness.

“We have a large number of carers who feel left out because of confidentiality and data protection regulations,” she says. 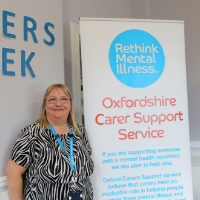 Julie Males and her team provide support to carers across the whole county.

“In those situations we can support and advise carers. We are not formal advocates, but carers do have certain statutory and moral a rights, and we can help carers have a voice and state their perspective.”

Her team of two full time and four part time staff support about 90 carers in Oxfordshire. Among the things they do are practical and emotional support, six-month intensive face-to-face support, and adult and youth mental health first aid training. In the whole county they have eleven support groups, and also more specific groups like veterans’ carer group and trans carers’ group.

Pat and Julie both think Carers Week is hugely important and valuable. Peer support is essential. But even today many carers don’t even realise they are carers or don’t feel comfortable identifying as such.

“They may just think that they are a husband or wife, or sister or brother, or in their culture it is their duty,” says Pat.

“It is important that carers realise they are carers and what valuable work they are doing – and that there is support available,” says Julie. She believes her organisation is well known, and she and her team also go out and about actively, attending events and promoting what they can offer.

Pat’s first piece of advice for every new carer is: join a carers’ group.

“When you first become a carer, you are likely to be snowed under with feelings. You feel that it’s all your fault. But when you hear other people’s stories, you will realise that carers come from such a diverse background and it can happen to anyone. So listen to others. Join a carers’ group. Phone Julie Males!”