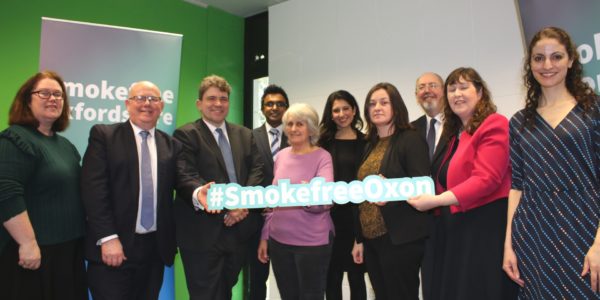 Local government leaders and the NHS in Oxfordshire have joined forces to support the launch of a consultation of the Oxfordshire Tobacco Alliance Strategy 2020-25 – and residents will have the chance to say if they want a ‘smoke free’ Oxfordshire.

The consultation launched on No Smoking Day – March 11 – with the key aim of the proposed  strategy  to reduce the prevalence of smoking in the adult population below 5% by 2025 and make the Oxfordshire the first ‘smoke free’ county in England.

You can have your say here and the results will be published on World No Smoking Day on May 31.

The definition of a smoke free county is determined by lowering the prevalence of smoking below 5% for the population which could pave the way to a smoke free generation by 2025 – five years ahead of the national 2030 target.

To put the plan in to action, Oxfordshire County Council has collaboraed with other local authorities and the NHS to sign the Local Government Tobacco and the NHS Smokefree Pledge as a commitment to the reduction in use of tobacco.

The proposed strategy is for the 90% of people who don’t smoke. There is also a plan to focus on people who are more likely to smoke than others, including those from deprived areas and people with mental health conditions.

Oxfordshire County Council’s Director for Public Health, Ansaf Azhar, said: “We are committed to work as a collective of partners and this public statement is a positive milestone to continue conversations and implement plans that will help residents to live healthy lives. We want people in the county to voice their opinions about smoking and how it affects their public spaces and places so we can confidently make some changes that will benefit our health and the wellbeing of others.”

The Alliance is asking members of the public and professionals to share their suggestions by April 11 for ideas that will make a positive difference to support people on their stop smoking journey https://tinyurl.com/SmokefreeOxon2020

The strategy will include four themes:

Where local regulation and enforcement is concerned, head of Oxfordshire County Council’s Trading Standards Service, Jody Kerman, said: “Good regulation and effective enforcement can help stop young people from taking up smoking, whilst also helping those who want to quit to do so.  In addition, the trade in illegal tobacco brings crime into our neighbourhoods, helps fund further criminality and puts honest businesses at risk. That’s why we’re determined to clamp down on it.

“We’re exploring some innovative ways to dispose of the significant amount of illegal tobacco products we have seized in Oxfordshire, designed to maximise economic and environmental benefits for residents.”

The annual cost of smoking to the UK national economy has been estimated at £13.7 billion.  A smoker consuming a pack of 20 cigarettes a day will spend more than £4,000 a year on their habit.

Residents in Oxfordshire spend approx. £73.7m a year on tobacco products and it is estimated that smoking in Oxfordshire each year costs society a total of approx. £121.7m in lost productivity, health and social care costs.