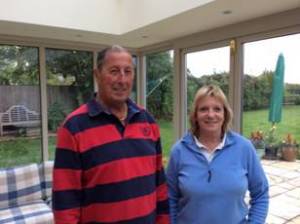 Last month saw people in countries around the world coming together to mark World Alzheimer’s Day on 21 September.

But a new study going on at one of Oxford Health NHS Foundation Trust’s hospital sites might prove a source of hope for those living with the condition.

The new trial taking place at the Warneford Hospital is looking at how Minocycline, a drug that has been used to treat acne and certain types of bacterial infections, may be used as a form of treatment for those with Alzheimer’s.

Minocycline is known to have an anti-inflammatory quality, and it is this quality that will be explored during the new trial, with inflammation in the brain believed to play an important part in the progression of Alzheimer’s.

Dr Rohan Vanderputt is a consultant old age psychiatrist and the principal investigator for the Minocyline in Alzheimer’s Disease Efficacy (MADE) trial.

He explained: “We already know that Minocycline is relatively safe. This trial will help us find out whether it improves the symptoms of Alzheimer’s disease and slows the expected rate of deterioration.

“It will also inform which is the best dose of Minocycline to improve symptoms without causing side effects.”

The most recent figures show that there are more than 820,000 people living with Alzheimer’s in the UK alone and costs the UK economy

The Minocycline trial will compare two different doses of minocycline with a placebo, which contains no active drug but appears exactly the same. The study is funded by the Department of Health and led nationally by Professor Robert Howard at King’s College London, the trial sponsor. It is being run with the support of the National Institute for Health Research Clinical Research Network (NIHR CRN), which is in the research arm of the NHS.

And one of the people hoping their involvement in the trial leads to a breakthrough in the treatment of the condition is Tony Thomas, 71, pictured above with his wife.

Tony, who lives in Chinnor with his wife, Cyndy, was diagnosed with early Alzheimer’s in 2011 after he noticed that his short term memory was deteriorating.

He said: “There is nothing I can do about my diagnosis, so I am prepared to listen to others. I have received good care and wisdom, and feel I should help other people with similar problems. If there is anything I can do to help, it is worth a shot.”

If Minocycline is proven to have therapeutic effects in Alzheimer’s disease, Tony and Cyndy will know they have played an important part in the drug’s re-invention. More importantly, it could provide new hope for families around the country living with this devastating condition.

If you would like to find out more about dementia trials in Oxfordshire and the Thames Valley, the NHS research team can be contacted on (01865) 231556 or dementia.research@nhs.net