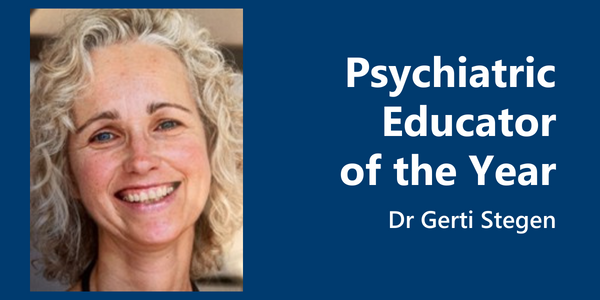 Dr Gerti Stegen has been named Psychiatric Educator of the Year in the Royal College of Psychiatrists RCPsych Awards 2022. This is a fabulous recognition of her achievements in a role she never planned to have but ended up loving.

Dr Gerti Stegen is a consultant psychiatrist with Oxford Health, specialising in psychological therapies, and was coaxed into medical education by the Trust’s then Medical Director Mike Hobbs, now a Trust governor.

“It wasn’t all planned, but I became an associate college tutor with the responsibility of ensuring the quality of, training for Foundation doctors, GPVTSs and Core trainees in psychiatry. That gave me the first taste of training and I loved it. You work with trainees from all over the world, from all kinds of different backgrounds, resolving issues and educational matters – it was so interesting!”

From then Gerti’s career in medical education progressed until she became the Director of Medical Education, a role from which she only stepped down at the end of 2021. And remarkably, it is a role which clinicians carry alongside their clinical work.

“It is a lot of work but so energising! The trainees are such a fabulous, fascinating bunch. You work across boundaries, learn together, and create educational opportunities together. It’s a bit like you are allowed to be a kid again – although of course you are also dealing with serious issues,” Gerti says.

She also pays tribute to her co-educators and administrators.

Gerti was nominated by a group of her trainees and felt greatly humbled by just being nominated, let alone getting shortlisted. And then she nearly missed the win. The prize giving ceremony was changed from real world to a virtual one because of a looming train strike, and all winners had to be informed by email.

“I was hideously busy and dealing with lots of emails, so I just put it on one side – but eventually I did click it open. And I was stunned!” she laughs.

Dr Stegen has been a dynamic and pioneering DME and kept the interests of trainees and patients firmly at the forefront of her approach to medical education.

As DME she strived to help trainees to be enthused about psychiatry and has helped them find their voice, strengths, and special areas of interest. She has also raised the profile of psychiatry as a specialty, supporting schemes to improve recruitment and forge connections with other medical specialties

Dr Stegen has set up numerous training initiatives ranging from teaching sessions simulating coroner’s court to peer support groups for medics of all specialties. She is an excellent sounding board for trainees wanting to develop new schemes or areas of expertise. She provides outstanding mentorship, advice, and encouragement in supporting trainees to pursue new interests and skills.

Praised by the judging panel for her energy and motivation to see her trainees succeed, Gerti was also commended on her ‘magnificent versatility’ as an educator.