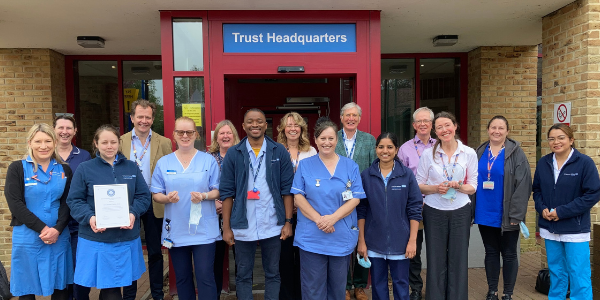 Exceptional in the face of pressure

Moving tributes from carers, colleagues and a student nurse were heard on Tuesday, May 3, when Deputy Head of Spiritual and Pastoral Care Rev Sally Horner and Leys District Nurse Team were crowned April winners of Exceptional People Awards.

The prize-giving ceremony at Trust HQ in Littlemore was opened by Trust Chair David Walker who said he was delighted to see some of our staff face-to-face and hoped to meet many soon at their workplace.

“We like to think that all of our staff are exceptional, but in our 6,500 staff there clearly are people who go beyond what would be normally expected. Cynics – and there are those! – might say that you have this scheme because you can’t pay more or recruit more staff, and clearly there are many pressures. But I can assure you that these awards are a genuine effort to show our appreciation and say thank you,” David said. 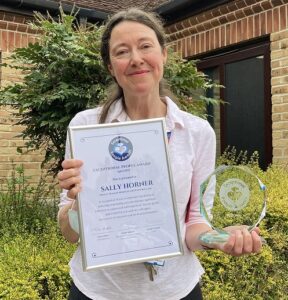 David then gave the stage to Director of Corporate Affairs Kerry Rogers who presented the individual award on behalf of Trust governor panel who judge it.

“Our governors are thoroughly enjoying awarding our exceptional people,” she said and read out Sally Horner’s nomination.

Sally had been nominated by Modern Matron Carol Gee, who praised how Sally has created a place of safety where patients, their families and staff can speak openly and without fear, and receive authentic, compassionate care.

“Sally has been an outstanding ambassador for Oxford Health,” Carol concluded.

Sally, accompanied by Head of Pastoral and Spiritual Care Rev Guy Harrison, was quite overwhelmed by the award.

“Oh my goodness, this is such an honour!” she said as she received her certificate, trophy and gift voucher from Kerry.

Fabulous feedback from far and wide 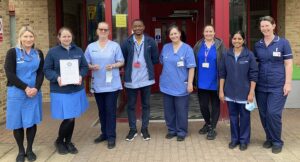 The Leys District Nurse Team was represented by a few who were able to briefly leave their duties to attended the ceremony.

“I am particularly pleased to have this pleasure as I am well aware of the pressures and challenges your team is facing. They are right there on the top of the list and you have been responding in an incredible way. A huge thank you from me.”

The Leys team had received two nominations: Service Director Emma Leaver and Service Manager Shafik Nassar both commented on the immense pressures the team is under and then relayed messages of fabulous feedback from a care company and from a student nurse who specifically wanted the team to be recognised. A representative from a care company wrote:

“I felt compelled to email you and congratulate you on having such an amazing team of nurses! As a care practitioner I recently provided end of life care to a lovely lady in Oxford. During my visits I had the pleasure to meet some of your team. The nurses I met were so caring, compassionate and skilled, offering lots of good advice and information to the lady and her family.”

And a student nurse had gone out of her way to get the Leys team recognised. She had written to University of Gloucester to see if they have any awards, saying:

“The team are amazing, and I am lucky to be placed with them and want them to get the recognition.”

Via Oxford Health’s Learning & Development this praise landed in Shafik and Emma’s inbox and resulted in an Exceptional People Award. Who knows, maybe there are more awards on the way to the Leys team!

Nominate now for May 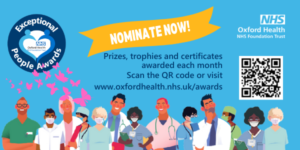 Give someone special or a super team a sunny surprise and nominate them for Exceptional People Awards! Closing date for May submissions is May 18.