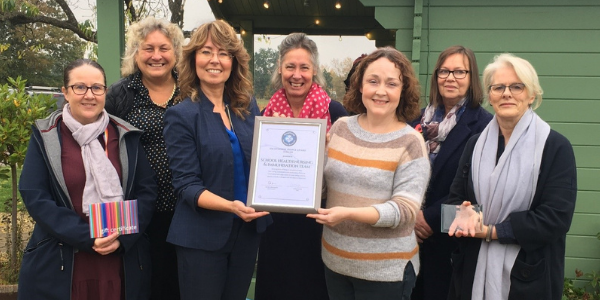 Exceptional team stemming the flow of the pandemic

Oxford Health’s School Health Nursing and Immunisation Team has worked tirelessly to support young people and deliver flu and Covid vaccinations to 12-15-year-olds in Oxfordshire. Now their heroic efforts have been recognised as they were crowned winners of the October team of the month in the Exceptional People Awards.

Judged by an executive director panel led by Director of Corporate Affairs Kerry Rogers, they scored the highest marks of all teams put forward for the month.

School nursing and immunisation leads met up for coffee in Abingdon to talk through the past few weeks which have seen them surpass the national average for vaccinations in schools. They were not expecting a presentation ceremony to take place. 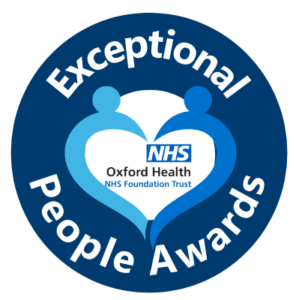 Nominate someone exceptional or a top team now! Click on the image to get a nomination form.

Kerry then revealed the team had won and read out the nomination which stated:

“The School Aged Immunisation & School Health Nursing team has worked closely in partnership to deliver the flu immunisations concurrently with the Covid vaccine for 12-15-year-olds. This directive was agreed by government the week before term started and all the well-laid plans to deliver flu vaccines alone had to be rearranged to accommodate Covid.

“The staff have worked tirelessly, over and above their hours and have displayed passion and commitment to help achieve one of the highest coverages in the whole of the UK. Many of them have worked significantly extended hours to achieve this. Having met them all this week, I was struck by the hardworking, flexible attitude and the passion to be part of stemming the flow of the pandemic and reducing the rates of flu.

“These staff are truly exceptional and need recognition for their amazing work which had to be delivered alongside their routine work. This has also escalated in volume in terms of supporting young people with their emotional and mental health. The teams have played a part in paving a path for a less disruptive future for young people who have now been vaccinated against flu and Covid.”

To rounds of applause Kerry then presented the team with a framed certificate, engraved glass trophy and £100.

Highly Commended teams for October were the FIND Team (forensic service for people with intellectual and neuro-developmental disorders) and the Functional Skills Team.

“I’m shocked we had been nominated. We’ve all just been totally focussed on our jobs these past few months and I’m delighted for the recognition of all the work we have been doing. From three experienced immunisers at the start of September the team is now about 20 strong with sessional nurses without whom we could have got through these past few months.

“I’m not surprised we’ve vaccinated about the national average. Everybody really strives to deliver because they want to protect children. We’re very committed.

“And we have to thank our families. They have put up with so much making meals, school runs and being understanding. We couldn’t have done it without their support and all the teams we work alongside.” 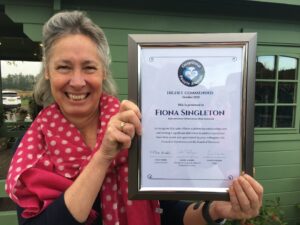 “Thank you so much for the Team award and Individual recognition. The team have worked so hard since September. The majority of them are new in post and they have achieved so much. It’s great that this has been recognised. I am really lucky to have such an amazing team and also to be part of Nicky Taylor’s team as she has done so much to raise the profile of immunisations and has worked hard to enable us to be planning a larger substantive team.”

“I am thrilled that the School Health Nursing and School Aged Imms team have been recognised for the amazing work they have done to deliver the Covid vaccinations to Oxfordshire’s young people. The final confirmation to do this work arrived with us literally as the new term started and yet the team have done a magnificent job to safely deliver this vaccine. Vaccinations for our young people are a vital part in the armour in our fight against the pandemic and this team can be rightly proud of the work they have done to support it. Congratulations everyone: It’s official – you are exceptional.”

“It was a joyful task for me to present Fiona with her Highly Commended Exceptional People Award. When Fiona discussed immunisation volumes with me, it’s like a highly charged game of monopoly! The figures the team manage to deliver are phenomenal. Fiona leads the team with commitment, energy and a young person focus that is simply brilliant. Well done Fiona!”

If someone has made a difference, however large or small, we would love to hear about it! You are welcome to nominate any member of staff  or any team at Oxford Health.  Nomination forms and rules are available on our  Exceptional People Awards webpage.