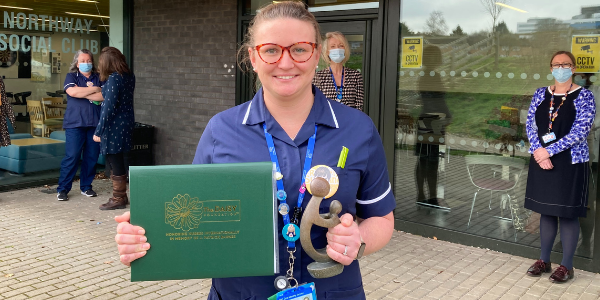 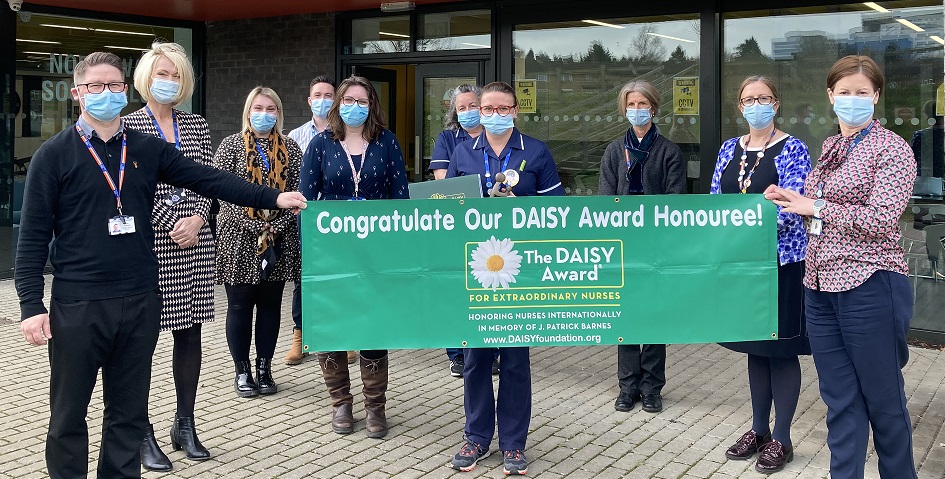 Liv’s DAISY Award was celebrated by her colleagues in the Central Team from Community Children’s Nursing Service and Trust leaders.

Olivia, known by all as Liv, had been coaxed to the building by her colleagues in the Central team at the Community Children’s Nursing Service who insisted they needed to ‘go and take a look at the new site from where they’ll be operating.’

To Liv’s bemusement, several senior leaders were present, banners and posters were on display and tea and cinnamon buns laid out. And Chief Nurse Marie Crofts started a talk on DAISY Awards.

“I guess you are all wondering why I am talking about this!” Marie noted. “This is because of you, Liv. We are here to present you with this prestigious award.”

Marie gave the floor to Deputy Chief Nurse Britta Klinck who read out the nominations Liv had received from two families. Both had had a baby with complex medical needs, and the nominations spoke of the extraordinary, compassionate care and support Liv has been giving to them. One of the nominations stated:

“Liv has become a very important part of our family’s life. It has been a very emotional, very challenging time, and the future is full of uncertainly for our daughter too. I know that with Liv by our side, we will be in the best hands and that she will do everything to make sure that we have all that we need to care for our daughter’s ever-changing needs and degenerative medical condition. I cannot thank her enough, and I only hope that all families have a ‘Liv’ in their lives.”

Soon tears were flowing – thankfully the ever-resourceful Service Director Emma Leaver had a packet of tissues at hand! Britta said:

“I feel incredibly touched by what these families say and what you have given to them.”

“Often we measure things like care plans completed. But this is what we remember. The care you have given to these families and all that you do is making an incredible difference to their lives. The DAISY badge is an exclusive badge – wear it with pride.”

“I didn’t expect anything like this! But it’s amazing to be recognised.”

Liv has been a nurse for seven years and currently holds the positions of Locality Lead for the Central Team and Clinical Lead for Special Schools. And her favourite part of the job? Working with families, of course!

The DAISY Awards is an international recognition programme that honours and celebrates extraordinary nurses and midwives. The DAISY Awards were established by the family of J. Patrick Barnes who died from complications of the auto-immune disease ITP in 1999.

Oxford Health joined the scheme in spring 2021. Now any Oxford Health patient, family member or carer on behalf of a patient can nominate a nurse that they feel has made a difference. All nominations are anonymised and winners chosen quarterly by a panel of judges.