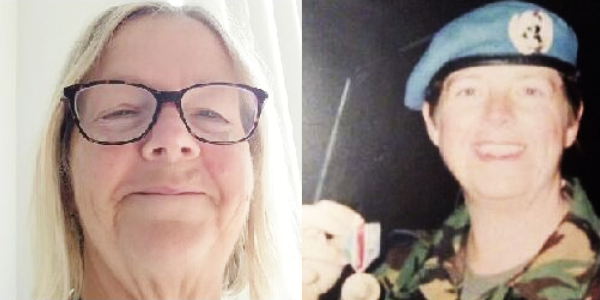 Farewell to Carol, our Service Manager for Community Hospitals… for now

Carol Duncombe, Oxford Health's Service Manager for Community Hospitals, is retiring after a career that saw her start work in a couple of businesses in her native Liverpool before nursing came calling.

Her work has seen her nurse in some incredibly challenging situations. But the pandemic has, in her view, been the toughest of all for her and her Oxford Health colleagues.

“I left school when I was 17 and worked as a clerk for a clothing company. At that time I didn’t have the urge to be a nurse but one of my friends said she was going to join the Royal Air Force. I thought it sounded interesting and so I went to the careers office in Liverpool and they were looking for nurses.

“I found I really liked the work and was with the Royal Air Force for many years and left as a sergeant.

“During that time I spent four months in Bosnia with the Gloucestershire and Wiltshire regiment. My daughter was two years old and I was the first woman in the combat area, as part of the United Nations’ operation. 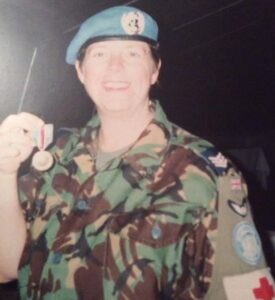 Carol during her time in Bosnia.

“We were allowed one ten-minute phone call every fortnight and one day I was making that call to my husband and we started being shelled, so I had to hang up – things like that were tough.

“I left the air force not long after returning from Bosnia and began nursing outside of the military. I started as a practice nurse and then moved to Bullingdon Prison for two years.

“I was then approached by someone who was involved with NHS direct and worked there until 2005 and that was amazing. I then came to work for Oxford Health, or the PCT as it was at the time, in April 2005.

“I have been the manager of the SPARC/SPA team, worked in urgent care and in community hospitals at Chipping Norton, Bicester and Oxford.

“My current role as service manager started as a secondment and I have been doing this role for three years.”

Pandemic is the biggest challenge

After a varied career with many challenges, not least her time spent working in a warzone, Carol rates the COVID-19 pandemic as the most difficult of all.

“The last fourteen or so months have been much more stressful and challenging than being at war in Bosnia,” she said.

“But while nobody would have wished for the pandemic it really has shown what Oxford Health colleagues are capable of.

“Everyone has done so well through the pandemic. When you look at the challenges we have faced we have conquered them as the people here are amazing. In my own role I’ve been supported by everyone right across the board and I want to thank everyone for the effort and commitment.”

Making a difference in the future

So, what does retirement hold for Carol? Well she has not ruled out putting her skills and experience to good use again, but for now there’s a little time off on the horizon.

“I’ve had a very varied career and nursing and work has always been at the forefront of my mind.

“I’m ready now to jump into a new life and take a bit of time off.

“My very first job at 14 was in a bakery in Liverpool and I have never not worked. So now I want to take some time for me and my family in the short term and then think about whether there are any projects or roles where I can make a difference after that.

“I will certainly miss Oxford Health.”

“I would like to pay tribute to Carol on behalf of the Directorate Senior Management Team and all the staff Carol has worked alongside over the years.

“Her energy, passion and commitment to doing the right thing for our patients, and our staff, will all be sorely missed. As will her wicked sense of humour!

“Without doubt Carol leaves community hospitals in a strong position having been part of the team that led them through the toughest ever year and a bit. I wish Carol a healthy happy and fun time and look forward to welcoming her back when she is ready!”