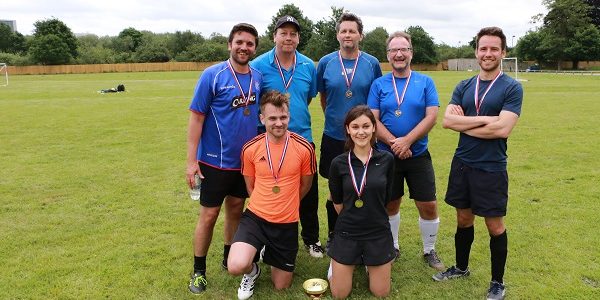 ‘For a few hours today I felt like I wasn’t in hospital’ was the view expressed by one inpatient from Vaughan Thomas Ward as Saturday’s football tournament came to a close.

In the unexpectedly glorious sunshine, eight teams made up of staff and service users from across the Trust took part in Oxford Health’s first six-a-side football tournament, in a bid to raise money for the Oxford Health Charity.

After a tense penalty shoot-out in the semi-final, the Warneford Woodpeckers, made up of staff and patients from Vaughan Thomas Ward, and OxICPT (Oxford Institute for Clinical Psychology Training) battled it out for the prestigious trophy. OxICPT (pictured) came out on top by two goals to one after a close game.

While the standard of football didn’t quite rival last week’s Champions League final, the spirit certainly did. As members of staff met for the first time, patients bantered and encouraged each other while ‘nutmegging’ their Consultants.

As David Murphy, Director of the Oxford Institute for Clinical Psychology Training and part of the winning team commented:

“For a few special hours, barriers between staff, service users and friends disappeared. I didn’t know which teams or players were service users, staff or friends and what’s more I didn’t want to know – it really had no relevance. That day we were all people who were there to support the Trust, have fun and do our best.”

A special thanks from a very sunburnt communications team to all those who took part and fully embraced the spirit of the occasion, we hope you enjoyed the day as much as we did.

Research in the NHS