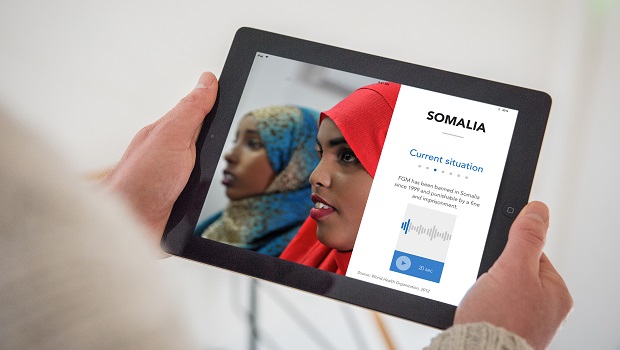 Designed by an Oxford Health public health nurse, a free app to combat FGM is now available for iPads.

An app to prevent female genital mutilation (FGM) and help FGM survivors by facilitating discussion about the practice launches today.

The ‘Lets Talk FGM’ iPad app was designed by Joanne McEwan, a public health nurse at Oxford Health NHS Foundation Trust, with the help of FGM survivors and campaigners. It is available for free for download on iPads.

The app’s content includes soundbites of key information in five languages about the impact of FGM, why it happens, the law and how to protect children, as well as providing local support for survivors.

Joanne McEwan regularly came across survivors of FGM during her work as a health visitor in Oxford. “FGM is a difficult subject to discuss,” she says. “I wanted to produce something that could help professionals enquire sensitively about FGM.”

Joanne led on a project to design the app, which was originally aimed at helping health care professionals discuss FGM with people they come into contact with during their work. She worked with the local campaign group Oxford Against Cutting, as well as Oxford Health and Oxford University Hospitals NHS Trusts, to put together the content for the app, developed by the Oxford-based digital agency White October.

Frances Place, who led the project for White October, says:

“Technology can play a big part in making information much more accessible at the point of need. Let’s Talk FGM gives health professionals vital information at their fingertips when talking to their clients.”

Besides English, the app includes content in Somali, Swahili (spoken in large parts of Africa, including Kenya), Arabic (both Egyptian and Sudanese dialects), Tagrinya (spoken in Eritrea) and Mandinka (spoken in Gambia and Western Africa).

The many languages available means that the app is client-led, and information can be tailored for each person. “Say you come from Kenya,” says Joanne. “The app allows a healthcare professional to say, ‘I’ve got information specifically about Kenya, and this is what might be happening there’.”

FGM involves removal or harm to female genitalia for non-medical purposes. While it is illegal in the UK, it affects approximately 137,000 girls and women in the country, although actual numbers are unconfirmed. Joanne says:

“FGM is a form of abuse – it is a violation of human rights and children’s rights. It is a form of violence against women and girls, and women and girls from communities where FGM might be practiced deserve protection, just like anyone else at risk of abuse or violence.”

Joanne won funding for the project via the Mary Seacole Leadership Award, which recognises outstanding work in the in the BME (black and minority ethnic) community.

Nia Fekri, a student from Oxford and a founder member of Oxford Against Cutting, said: “I’m of Iranian descent, and though FGM is mostly restricted to rural areas in South Iran, my mother joked about just what my grandmother would have thought about me discussing FGM openly. Even though it was just a joke, it made me realise just how much of a taboo it still is to discuss FGM.”

While the app was originally aimed at healthcare professionals, pilot testing in Oxfordshire found that community and campaign groups found it a very useful too.

Joanne says, “Ultimately, my aim is that the app will help remove uncertainties, providing practical and current guidance for both clients and professionals.”