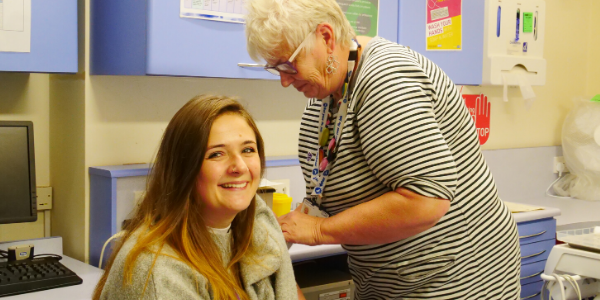 Sessional vaccinators bring jabs to where staff are

It is close to lunchtime on a Thursday at the Luther Street Medical Centre – the GP practice for homeless people  in Oxford – and a queue at a door is moving fast. But these are not patients; they are the centre’s staff getting their flu jab.

Behind the door, occupational health nurse Halina Simm is brisk, friendly and efficient, taking just minutes to vaccinate each person. In Luther Street’s busy schedule, the flu clinic is tactically placed just before the afternoon handover, easy for staff to attend as they would be coming to the meeting anyway. And crucially, Oxford Health is bringing the flu clinic to staff instead of asking staff to go to a flu clinic.

It’s people like Halina Simm who make this possible. She retired seven years ago but has come back as a sessional vaccinator from October to January.

“I love nursing and my colleagues and want to actively promote their health,” she says.

This autumn she is working on two contracts, one with occupational health and another with school nurses, vaccinating primary school children who are eligible for flu vaccine by nasal spray.

“I’m going all around the county’” she laughs. “But I’m lucky because everybody knows me.”

It’s easy to see how she puts people at ease. She briefs each one about what the vaccine is, how it works, how it differs from that given last year and what’s needed for aftercare: drink plenty of fluids and keep moving the arm on which you had the jab. She also confirms that the adult version of the vaccine can’t give you flu.

Nurse Rosie and her colleague, receptionist Danielle Seetaram, didn’t hesitate a moment about having the jab.

“I just don’t want to get the flu,” says Danielle. 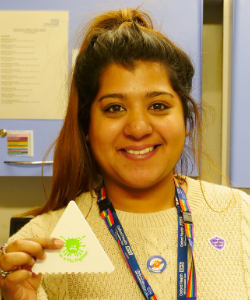 Danielle Seetaram got her flu jab and a windscreen scraper – both useful for the winter!

“And I don’t want to pass it to anyone else,” says Rosie. “I just never think that I would get flu myself!”

They are both aware of how important it is to protect the patients who come to Luther Street, some of the most vulnerable in the city: the centre cares for Oxford’s homeless population. Originally set up in 1985 in a temporary hut, it now has treatment rooms for physical and mental health assessments, podiatry care, dental services and others. Patients at Luther Street are also offered the flu vaccination.

Flu clinics are part of Oxford Health’s annual flu programme. Health and social care organisations across Oxfordshire have joined together to call on healthcare professionals to make sure they are immunised against flu.

By vaccinating front line staff, each organisation can stop people from catching the virus and passing it on to the sick and vulnerable. It also means health and social care organisations can be more resilient during the busy winter months.