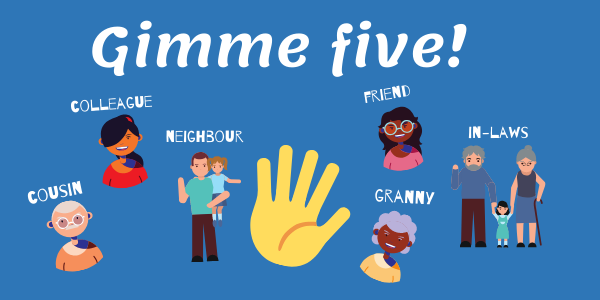 Gimme five! Join now to have your say in May

Invite your friends and enter our prize draw

The trust’s annual elections are on their way and we want existing and new members to vote and ‘Gimme Five’.

Becoming a member of Oxford Health NHS Foundation Trust gives people a real chance to have a say and help shape the services we deliver.

Your views matter and we want our Council of Governors to truly reflect the communities where we work.

That’s why we want people in all geographical areas to join our campaign to invite five newcomers to join the trust – and if you do, you will be entered into our prize draw.

NHS foundation trusts were created some 15 years ago to devolve decision making about local NHS services to local people. In practice this means local people, patients and service users of the trust can elect their representatives to the Council of Governors who, together with the Board of Directors, set the strategic direction of the trust.

Only members of the trust can stand as a candidate or vote in our elections. The nominations open in the end on March and close in mid-April. But don’t miss out: join by April 15 to be able to take part in this year’s election.

You are likely to know people who would also like to have a say in their local health services. Take part in our Gimme five! campaign.

Invite five people to become members and ask them to enter your name in the application form in the field ‘How did you hear about the trust’.

We will verify that five people have joined as a result of your nomination. We will then put your name into a hat and chose at random two winners for a £50 high street voucher.

All members, including Oxford Health staff, are invited to take part. However, the five new members should not work for Oxford Health – members of staff are already members of the trust unless they opt out.