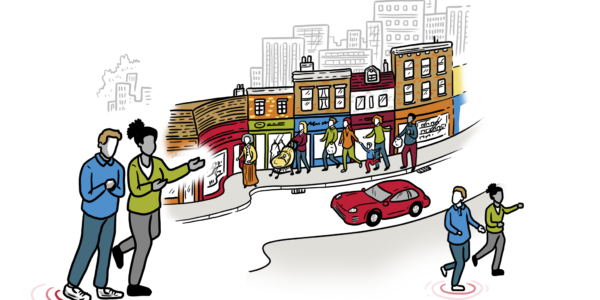 Feeling Safe is a new treatment programme for persecutory delusions, which promises a step change in the treatment of severe mental health problems.

Persecutory delusions – unfounded, strongly held beliefs that other people intend to harm us – have traditionally been regarded as a key symptom of psychiatric diagnoses such as schizophrenia. Fearing harm from those around them, patients often withdraw from ordinary life. The negative consequences of this withdrawal, for patients and family alike, can be profound.

The Feeling Safe programme was developed by researchers from the University of Oxford, who tested the treatment in a randomised controlled trial with 130 patients with persecutory delusions. The delusions had persisted despite use of standard treatments, according to results published in the Lancet Psychiatry. Half of patients were found to achieve large benefits from the Feeling Safe programme, with a further quarter making moderate gains. The trial was supported by the NIHR Oxford Health Biomedical Research Centre.

Feeling Safe is the result of more than ten years of research and clinical practice. Its success has been built on listening carefully to patients, to really understand the causes of the problems they are facing. The trial results give us great cause for optimism in the treatment of a problem that is very common in people with psychosis, immensely distressing for patients and families, and yet often does not improve sufficiently with current treatments.

Over twenty sessions, the programme helps people to develop new memories of safety and addresses the factors that often maintain persecutory thoughts, such as worry, poor sleep, and low self-confidence. Feeling Safe is personalised and modular. Patients choose their preferred treatment elements and the order in which they undertake them. It’s an active therapy, based on the belief that people make gains by trying out things in everyday life. The results of the trial have been extremely pleasing. The challenge now is to reach the many thousands of people whose lives have been disrupted by severe paranoia.

Persecutory delusions are typically treated with anti-psychotic drugs, but too many patients do not respond and side effects can be unpleasant. Four out of five patients with persecutory delusions are unemployed and spend less time in social and leisure activities and more time resting and ‘doing nothing’ compared with the general population. Life expectancy is on average 14.5 years shorter, due to largely preventable conditions such as high blood pressure, diabetes and heart disease — illness to which inactivity is likely a major contributory factor.

So many of the patients we visited were spending virtually all their time at home. They were acutely aware of all that they were missing out on. Our aim was to bring them back into everyday life, to help them get back to the things they like doing. The enthusiasm with which people have participated in the Feeling Safe programme, and the positive change it has brought about, has been wonderful to see.

A participant in the Feeling Safe trial said:

I was housebound. I missed out on so many things in life. I missed out on meeting my friends, family events, meals, training, sports, I was just in a very paranoid state. After a life-changing study – for me – I feel very, very safe. It worked. It really did. It helped massively. You get better sleep, feel more confident, be more active in the day. Genuinely, inside I feel very happy. It’s profoundly changed my life. I don’t have to worry any more about people potentially attacking me or thinking sometimes there’s a weapon in their pocket. That’s all floated away.

Read the full paper: Comparison of a theoretically driven cognitive therapy (the Feeling Safe Programme) with befriending for the treatment of persistent persecutory delusions: a parallel, single-blind, randomised controlled trial. (The Lancet)