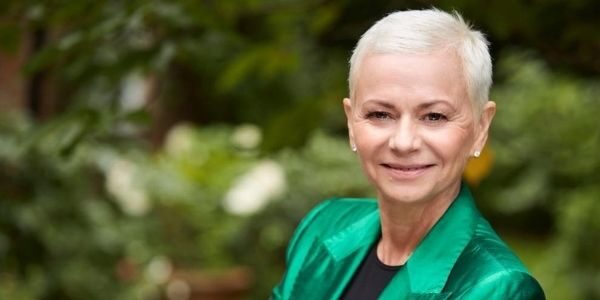 A lovely message popped up on social media on the first Sunday of the year 2021:

A woman called Harriet Green had named Oxford Health NHS Foundation Trust as one of the organisations who had had the greatest impact on her in 2020.

It was The Purpose Matters award:

“for the trust with whom I spent much time in Lockdown 1 & for teaching me new skills & approaches that deeply help others in need.”

We had to find out who says such good things about us!

Harriet Green OBE is former chair and CEO of IBM Asia Pacific, global executive and business leader. In February 2020 she had just returned from two years in Singapore running complex businesses across Asia. When the first lockdown started in March, she answered the national call to volunteer for the NHS. To her dismay she was initially told there wasn’t anything for her to do.

“But I am very, very persistent and after many letters and phone calls I was put in touch with [community involvement administrator] Maya Jose from Oxford Health. She was new to her role and I was new to NHS and together we learnt,” she says.

“The funny thing is, I have run big companies on four continents but the first three jobs Maya gave to me I failed to pass the interviews,” she laughs.

This surely is much too harsh a self-assessment, but Harriet explains.

“The first was to make laundry bags for staff. But I can’t sew, and I don’t have a sewing machine, so I failed! The second job was writing letters to people, and I thought this is wonderful; I am a good writer, I can do this,” she laughs.

But then she felt that her handwriting wasn’t up to the standard.

“This is Oxford! There are hundreds of people with more beautiful writing and calligraphy awards! So I failed again!”

Her third job was to deliver care packages from the Oxford Heath Charity to staff around the county.

“I am kind of ashamed to say this but I am not a very good driver. For the past twenty years I have been fortunate be driven and despite having a home in Oxford since 2004, I’ve never really lived here. I was probably the worst ever delivery driver because I didn’t know where anything was.”

Eventually she and the great volunteer teams came up with the idea of dividing personal protective equipment (PPE) into small individual packages for staff to pick up.

“I did hours and hours of folding aprons and putting them and other PPE into small plastic bags; the most mind-numbingly boring job on the planet. And all the time I was talking to Maya and others, and I learnt a great deal: about humility, about the NHS, about the administration and about the sensational volunteers.”

Maya’s view of the ‘failures’ is quite the opposite to that of Harriet’s:

“Harriet was my go-to person for any sort of emergency. She was very flexible with her approach and always available at short notice.  During the March lockdown we were in the infancy state of transitioning onto the online platforms, so we did have our shortcomings. Harriet gave me the right nudge to get it running smoothly. Just as much as she meant business, she did have a caring personality, too. Her messages were encouraging and a big support. When I mentioned that my son was getting tested for COVID19, she genuinely was concerned about his health,” Maya recounts.

On the top of her many board and advisory roles Harriet is in fact a business coach and mentor so it is clear Oxford Health received more from her than neatly folded aprons!

“I have a large following on social media and in October was named one of the most influential voices in the UK by Linked In for 2020. I have posted about the great work that the NHS and volunteers are doing, about the amazing people I’ve met and the things I’ve learnt,” Harriet says.

“Every year I do my awards, and this year I called them my Year of Wonder Awards. I wanted to honour the NHS, the trust in Oxford, the volunteers and all the great people I’ve met and learnt so much from. Hundreds of thousands of people have commented on the posts. It’s just an easy and fun thing to do.

“The work that NHS does, supported by volunteers, doing such meaningful work should be shouted out. I felt genuinely proud to help. Okay, I’ve been a CEO of large companies, I’ve travelled the world, I’ve been privileged to work at this level. So, for every reason I should get into my car or marshal the vaccine. None of us are above helping where we can.”

Next Harriet will be helping with the Covid vaccine effort: she has just been accepted to work as a volunteer marshall in one of Oxford’s vaccine centres.

What Harriet said on social media: