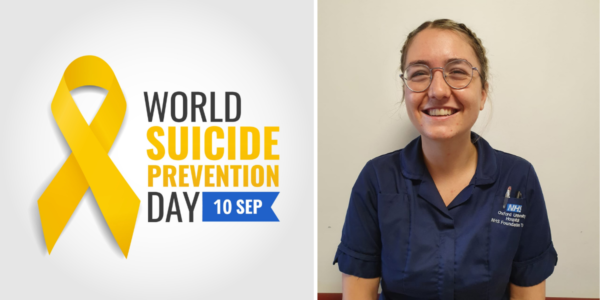 Here we meet Lara Stannard, who tells us her story and how just one conversation with someone who was willing to listen and several sessions later resulted in a changed attitude to her mental health.

Suicide affects not just the individual but everyone who knows them. This talks about the challenges that Lara faced while tackling her mental health head on.

If you or someone you know is feeling low or suicidal then contact one of the organisations below for support. Help is always available if you need it and just remember you are never alone.

I had been suffering with depression for several years. Primarily I work as a nurse on the Haematology cancer ward but I was redeployed to a Covid ward at the John Radcliffe hospital for a month during the pandemic which affected my mental health even more alongside additional trauma that had occurred earlier in my life.

Shortly after I attempted to take an overdose and ended up in the John Radcliffe hospital where I was introduced to Theresa Cookson, psychiatric liaison practitioner for Emergency Department Psychiatric Service (EDPS).

At that point I didn’t care, I didn’t want the help. I had completely lost interest in everyone and everything around me. Some days I struggled to even get out of bed, shower and get dressed. I was numb. Every day I was forcing myself to do day to day things.

Theresa never gave up on me. She spoke to me and I slowly started to give something back, telling her about myself and my life.

I agreed to carry on having sessions with Theresa, but I admit it wasn’t easy. The process was slow. I stopped doing night shifts to try and get a routine back into my life.

I have just had my second to last session with her and I admitted to Theresa that it was the first time in a long time that I don’t remember having a suicidal thought. Also, I felt anger. Although I couldn’t explain the feeling, I am feeling much more powerful than I felt when my mental health was at its lowest.

Throughout this process the haematology ward itself and my colleagues have been the biggest support I have. My ward manager even acted as my next of kin and brought me to the John Radcliffe when I attempted the overdose at home as she was closer to me than most family members. Without her and my other close friends on the Haematology ward I simply wouldn’t be here now so I am incredibly thankful for their continued support.

I am going on to have long term counselling so I can continue to work on myself and improve my mental health. I have good days and bad days but the good definitely outweigh the bad and I actually can feel things now including emotions and have started to enjoy waking up and getting on with my day.

I have rekindled my interest in sports and I now feel in control. I am challenging those difficult thoughts now instead of letting them overcome me.

The sessions that Lara was having are known as BIRSH (Brief Interventions in Repeat Self Harm) which is a project led by Oxford Health aimed to prevent and problem solve to find suitable interventions to support people who self harm or attempt suicide.

Theresa Cookson who works with Lara said: “Lara did all the work and even when we explored, challenged and unpicked certain aspects of her pain she kept moving forward. She changed work patterns, set achievable goals and built on them.”

She questioned her thoughts and started to push against them to make space for new empowering ones. Lara did things that she would have otherwise cancelled and soaked up all the positiveness it provided. She was honest even on the days she struggled, and It has been amazing to walk alongside her in in this process.”

Speak to a mental health nurse by calling 111 or visiting the 111.nhs.uk

A bereavement by suicide support service is provided by Buckinghamshire Mind