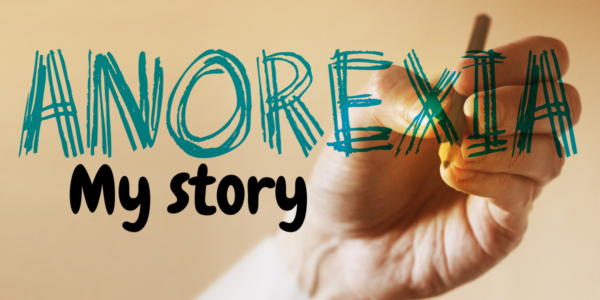 We look at the story of a person who first developed an Eating Disorder at the age of 13 and the challenges they have had to face throughout their life to get them to a more comfortable place of living with the disorder.

Remember, if you are suffering from an eating disorder, help is available. Take a look at our Cotswold House site to find out how you can start to get help.

If you think that you, or someone close to you, could have an eating disorder there’s some useful information on Beat that could be helpful.

I developed an ED when I was 13. I can’t say the exact reason that this happened, in hindsight it was a combination of factors including low self-esteem, perfectionism, transitioning to senior school and other biopsychosocial triggers.

I came up with rules for what foods I could eat, the number of calories I could consume, the amount of exercise I had to do, and other strict rules that dominated my thoughts. These behaviours continued to progress, and I became withdrawn, grumpy and oversensitive as my weight dropped and energy levels depleted. I was referred to CAMHS by the school GP and quickly diagnosed with Anorexia Nervosa. I was in the depths of my eating disorder for a long time and eventually was removed from school due to my low weight. I spent 6 months at home, with daily visits from the CAMHS nurses for meal supervision and medical monitoring.

Over a couple of years, with the help of a number of different therapy approaches and support from my parents, I did manage to improve my physical condition and understand that my relationship with food and eating was having negative impacts on my life. Throughout this period I had managed to complete school and get accepted to study at University (a classic “perfectionist”, I threw myself into my schoolwork as well).

I moved 300 miles away, determined to start again with people who didn’t know me and couldn’t label me as “the anorexic”. Physically, I was at the lowest threshold of my “healthy weight” target and determined never to gain weight.

During this period I genuinely thought I had recovered from my eating disorder. My early treatment had focused entirely on my weight and BMI. Now I was eating everyday and maintaining my weight: what more could I ask for? I put my low mood down to depression and anxiety, rather than exhaustion from my strict routine and intrusive thoughts. I looked for counselling and took medication during my final year of university, believing that once I had finished, my stress levels would go down and everything would feel better.

When I moved to Oxford after graduating the change from student life to a fulltime job enabled the eating disorder to get a stronger grip.

Over the next years my exercise addiction really became the main focus of my ED. I was getting up at 5.30am to go to the gym before work, then going again on my lunchbreak and after work before any socialising I fitted in. As well as this, my fear of eating deteriorated to a point where I only ate once a day – last thing before bed so that I didn’t have to think about the guilt I felt after eating. This 24 hour fasting routine gave me a constant headache, stomach pain, poor circulation as well as high anxiety levels.

After some kind but frank conversations with friends, I was referred by my GP (who was the most supportive I have ever met) to Cotswold House, where I was put on the waiting list for Cognitive Behavioural Therapy (CBT). At this point my weight and my mood was low and so I had a monthly check in with the Cotswold House team as an outpatient to make sure I did not deteriorate further.

By the time I reached CBT I had waited for 18 months; nothing in my behaviour had changed and my body and brain were exhausted to the point of burnout. I had suicidal ideations every day and was experiencing panic attacks at any change to my routine. I kept up friendships but was never fully present, always planning my next exercise fix. My diet consisted of 4 foods.

A few weeks into CBT, my therapist realised I was not in a state to make any changes myself. She recommended that I should go in as an inpatient at Cotswold House. This was the shock I needed and I knew I had to take this offer seriously.

Something that I hadn’t expected, foolishly in hindsight, was how medicalised the setting was. New patients are under strict observation, meaning you are never fully alone. There were regular blood pressure and blood sugar tests, vitamins and meds, blood tests to monitor electrolytes, as well as the regular rotation of meals and rest periods, limited water and restricted bathroom visits. On the first day I broke down, feeling despair and fear as the reality hit me.

By far the hardest thing for me was going “cold turkey” with exercise. I don’t think it is an exaggeration to say that it felt like I was in withdrawal: I felt a physical need to move my body, which obviously is something that is out of bounds on the ward. I was so emotionally fragile that being in this space where all I had to do was eat and rest – and even that was out of my control – was completely overwhelming. Bottled emotions came flooding out and I spent the first week almost entirely in tears. But this was the change I had needed: a full stop.

Hospital gave me the chance to prove to my ED that my emotions are separate from what I eat and the amount of exercise I do.  I began to realise that these were the feelings that had originally caused the ED to take hold and thrive.

Regular therapy, group sessions with other patients and “one-on-ones” with nursing staff filled the time between meals, ensuring my entire focus was on getting better. It had become my fulltime job. Over time I started to develop more useful ways to recognise and deal with my emotions, including journaling and writing poetry, drawing, colouring, mindful meditation and sometimes just sitting with the feelings until they passed.

From this rock bottom I could review everything in my life and remove everything that was preventing me from fully living. Early on in my recovery I realised that this would take me much longer than the time it takes to restore weight. 10 years of obsessive and destructive habits would take more than a few months to reverse in a sustainable, genuine way. I was discharged from Cotswold House in 2019, having gained not only weight, but also the knowledge and tools I needed to change my mindset and remain accountable to myself.

Now, I can admit that things aren’t perfect; I have not been “cured” from intrusive thoughts or long standing beliefs. The difference is that I have the resources to anticipate, recognise, deflect and adapt to these thoughts. I’d like to think that it is me who is leading my life now, and not the ED voice. Whilst some days it is still strong, the important thing is that I don’t listen to it. Hopefully in the years to come that voice will quieten to a whisper.