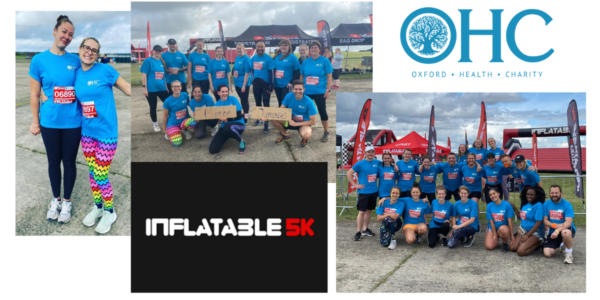 Lots of laughter and joy was had on Saturday August 7 when members of staff from across Oxford Health took part in an inflatable 5k running challenge raising funds for our own Oxford Health Charity.

Many teams across Oxford Health have really felt the pressures of the last year and this was a chance for staff to go out and enjoy themselves and have some fun.

The Highfield team of 19 staff members overcame the 28 giant obstacles and managed to raise an amazing amount of £1,860. The Highfield cares for young people between 11-18 years with acute mental health needs. They currently have a large garden area, but it isn’t suitable for all year-round use.

All the money raised will go into revamping this area to make it more suitable for the young people they currently support and so it can be enjoyed by many more people in the years to come.

Kirsty Gawthorne, Senior Occupational Therapist at the Highfield, said: “It was a fantastic event to organise and take part in, with a lot of laughter had by everyone involved. Working solidly throughout the pandemic at The Highfield has been no easy task, and had various challenges for us all, so I wanted to arrange something for staff that was a bit of fun.

“I’m very proud to work alongside such an incredibly hardworking passionate team at The Highfield, and we would like to thank everyone who has donated towards the garden appeal as the re-design is going to make a huge difference to the young people that we support.”

“We had a great sense of camaraderie fundraising for a cause we are passionate about” said Daisy Gibson, assistant psychologist. “And that mixed with giant adult bouncy castles, what more could you want!”

Lorna Wild, assistant psychologist, said: “A lovely day that not only raised money for a really important cause but bonded the team as well.”

The 5k inflatable run was as much fun as it sounds, said Lee McCallum, flexible healthcare assistant. “We got sweaty, we puffed, panted, giggled, bounced and somersaulted our way to achieving well over our target of £1200. A few bumps and scrapes aside everyone emerged relatively unscathed and with good memories of a truly unique and worthwhile team effort. Well done Highfield team.”

12 staff named the Mumbo Jumpers from the Adult Mental Health Team (AMHT) North took on this inflatable challenge as well raising funds for our Oxfordshire and West Mental Health Fund.

Mike Catungal, a community psychiatric nurse based at Elms Centre in Banbury said: “It was a fun event, lovely to have been with my colleagues . It truly was a Multidisciplinary turnout. The 5km was a manageable challenge and the inflatable obstacles made me feel like a big kid. I hope we have raised awareness and money for the Trust charity. Next year come and join the fun. You can run, jog or walk. It doesn’t matter. All abilities are welcome”

Charlotte Bolter, administrator said: “Fun day out with everyone!” and Chloe Walsingham, physical health care assistant said: “Great laugh with the whole team and raising money for a good cause.”

Sophie Black, interim senior modern matron at Cotswold House, Oxford and her friend Brittany Novello (who doesn’t work for the trust) ran for our Where the Need is Greatest fund, to say big thank you to all the work the NHS have done in the last year.

Sophie said: “I had a great time doing this 5k! Spirits were running high from beginning to end. Everyone cheered one another along, with a little bit of friendly competitiveness thrown in there too.

“The inflatables were the best bit and we all had fun racing one another in pairs! Even the sunshine came out to cheer us on. We’re really pleased with the amount we have raised and look forward to it being put to good use by the charity. A special thank you to all my colleagues who sponsored and supported me.”

Julie Pink, Head of Charity and Involvement, said: “This has been our biggest fundraising event to date for Oxford Health Charity with almost 50 members of staff involved.  It has been so heart warming to see the pictures of them all taking part and having fun.  The funds they have raised will go towards supporting patients, carers and staff across the Trust in line with the projects or areas they have selected to support and we are very grateful to all those who donated.”

If you want to organise a fundraiser for an event you are involved with or have an idea which you would like some support with then get in touch with Oxford Health Charity by emailing charity@oxfordhealth.nhs.uk 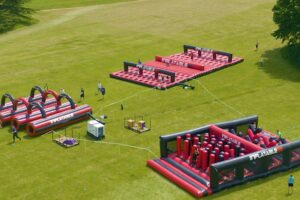 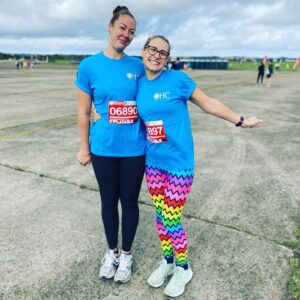 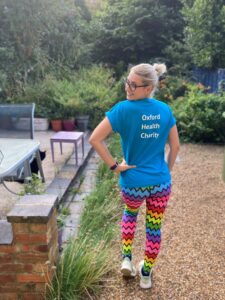 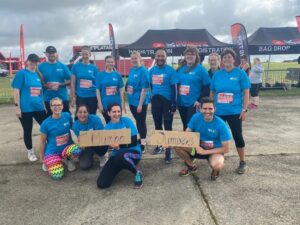 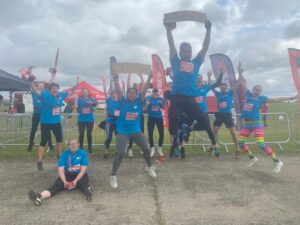 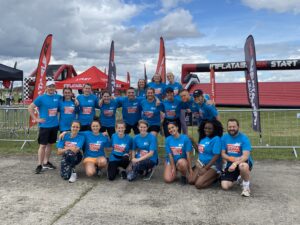