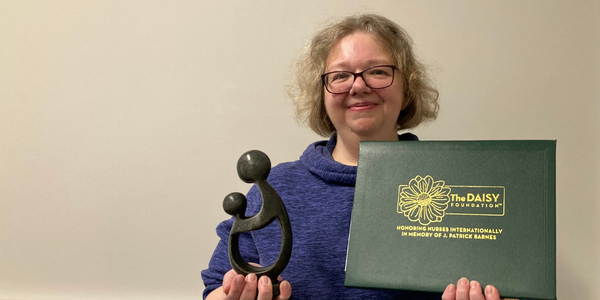 Jude’s wisdom and support for young mother brings a DAISY

A grey November morning brightened up when Judith Richardson received a DAISY Award in a surprise ceremony at the Slade in Oxford. She had been nominated by a mother who said: “Without Jude's wisdom, encouragement and support, my son's first year would not have been as settled and happy as it was.”

Jude works as a community psychiatric nurse in the Infant Parent Perinatal Service (IPPS), and the whole team had been invited to a team meeting under the pretence that the newish team manager Fern Bronock wanted to get to ‘know everyone a bit better’.

DAISY Awards celebrate extraordinary nurses and part of the international DAISY Foundation’s guidance is that the award should come as a surprise to the winner. Team leaders and managers then need to come with elaborate plots to invite everyone to an in-person meeting without revealing the reason.

Marie gave a brief background to the DAISI Awards and emphasised that choosing the winner each quarter in by means an easy task.

“The panel is made up of patients, carers and nurses of types, so it’s not just us. All nominations are anonymous, so we don’t know who we are judging. Every quarter we get 30-40 nominations, and it is always a hard decision.”

“For the DAISY Award, what we are looking for is the essence of nursing; how a nurse has really made a difference to someone’s life.”

Marie then revealed that the leadership team were there to present the DAISY Award to Jude, and read out the nomination, warning that tissues may be needed – and they were! 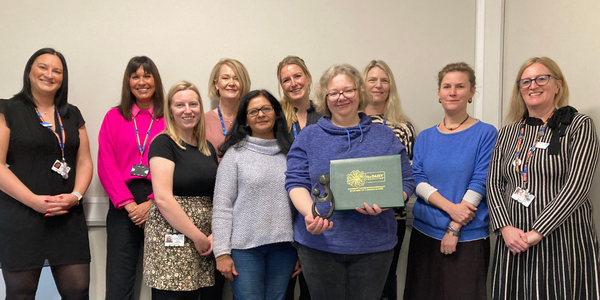 Jude had been nominated by a young mother who wrote:

“Jude supported me towards the end of my third trimester and throughout the first six months of having my second child. My first pregnancy had been very difficult, and my anxiety levels were increasing as I prepared our family for welcoming a sibling for our daughter.

During the time I worked with Jude, I also discovered that our daughter is neurodivergent and combined with the joy and challenges of a new-born, I was supporting and advocating for her as she made the transition to primary school with undiagnosed special educational needs.

Jude was an ever calm, pragmatic and insightful constant during that time – offering me a safe space to process my feelings and giving me the confidence to trust my instincts. Without Jude’s wisdom, encouragement and support, my son’s first year would not have been as settled and happy as it was.”

Jude felt honoured and humbled to receive the award:

“It’s a huge surprise – I am just doing my job. But it’s lovely to be recognised.” 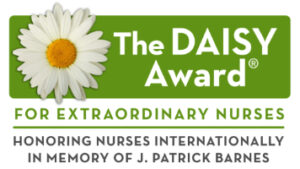 Nominate an extraordinary nurse for DAISY

Have you or your loved one been met with extraordinary kindness and compassion by a nurse from Oxford Health? If so, nominate them for DAISY! You can do so online here.

Oxfordshire parents urged to get their children protected from flu

Board of Directors’ meeting, Wednesday, Nov 30 @9am