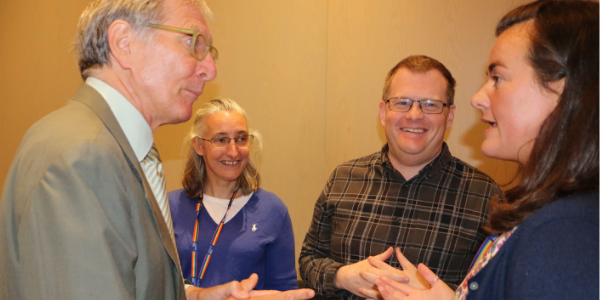 Expert by experience Ben McCay joined the Council of Governors meeting to see how we can make the meetings easier for everyone to understand.

Ben McCay from Banbury works as a consultant expert by experience for Oxford Health and Oxfordshire County Council, helping both organisations plan and design services for people with learning disabilities. He is also co-chair of trustees for My Life My Choice, a local self-advocacy charity.

“I got involved in this because I wanted to share my experience,” he said.

“It’s better to work together to improve services; to get things right the first time.”

Among his many projects, Ben is helping Oxford Health make the trust membership and governance more meaningful and accessible for people with learning disabilities. Last week Ben joined the Council of Governors at their quarterly meeting in Thame.

“I came here to see what it’s like, and maybe I’ll come again in September,” he said.

The Council of Governors meetings are open to the public so anyone is welcome.

Before the meeting Ben studied an easy-read version of the evening’s agenda which patient experience lead at the trust, Rachel Miller, had created. In his role as a consultant Ben often helps to co-produce material like this, including an easy read membership application form and consent form for the use of photographs and video.

What does NED stand for?

Oxford Health’s goal in involving experts by experience in the trust governance is not only to make it more accessible to people with learning disabilities, but easier for everyone to understand.

After the meeting we asked Ben about his observations.

“It was very formal. Our co-production meetings are less formal,” he said. “But nobody introduced themselves. Only the new governors and people who are leaving the trust were introduced,” he pointed out.

“Then they started talking about NEDs! In our world we don’t call people NEDs. Do you know what it stands for? Non-educated delinquent,” Ben suggested.

This may be news to the non-executive directors of the trust, otherwise known as NEDs. In fact, at the beginning of the meeting, the trust chairman David Walker asked everyone to shout out if they heard an acronym they didn’t understand because the NHS is notorious for acronyms.

“But I didn’t feel like shouting out when nobody else did either,” said Ben.

This led him to think about a simple device that can improve meetings like this, not only for him but to anyone who could feel self-conscious about shouting out: green and red cards that the holders can show if they would like to speak up or if they don’t understand something.

Does Ben think he could nominate himself as a candidate to become a governor?

“Possibly,” he said. “There are a lot more people in a meeting than I’m used to, and I am already involved in so many other things.”

However, for Oxford Health, Ben’s first ever governor’s meeting taught us lot.

“We would definitely need an easy read agenda well before the meeting, and the papers in easy read, too,” he said.

He proposed that having a buddy to go with or a more experienced governor as a mentor would be helpful. The chairman and others in the council could also be trained to run the meeting with people with learning disabilities in mind.

“What we are talking about here is co-producing the Council of Governor’s meeting,” said Rachel Miller, the trust’s patient experience and involvement lead for people with learning disabilities.

That is what Ben is helping to do already, even if he doesn’t end up becoming a governor.

This week, 17 – 23 June, Oxford Health is celebrating Learning Disability Pride. People across the trust are invited to share the achievements of people with learning disabilities and the work being done together.