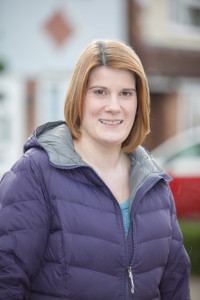 Kelly has been nominated for encouraging patient Susan to follow her dreams of becoming an occupational therapist.

A community psychiatric nurse has been nominated for a prestigious award by a patient determined that she is recognised for her care and compassion.

Susan Hemming expects her “fantastic” nurse Kelly Hayes to say she is just doing her job, but insists Kelly goes far above and beyond that. She has nominated Kelly for the Yakult Patients Choice category of the Nursing Standard Nurse Awards. Kelly is one of four nurses, out of 100 nominations, to be shortlisted by the judges.

The Patient’s Choice Award enables members of the public to thank a nurse who has made a real difference to their or a loved one’s healthcare. After a public vote, the winner will be announced at a ceremony at The Savoy in London on 1 May 2015.

Susan has experienced mental health problems all her adult life and had given up on her dream of becoming an occupational therapist. She had been unable to go to university because of dyslexia. When Kelly took over Susan’s care two years ago she was at rock bottom. “I had given up on my life,” says Susan. “I was reverting to my anorexia, self-harming daily, feeling suicidal and without any hope.

“Kelly believed in me. Every time I was ready to give up on life she convinced me life hadn’t given up on me yet and neither had she.

“Everyone was suggesting a full-time intensive programme for complex needs. Looking back, had I done so, I would have let my disorders define me and probably never have regained motivation.”

Kelly, who works for Oxford Health NHS Foundation Trust, researched Susan’s options and convinced her to sit the entrance test for a college access course. She failed at her first attempt. “I was suicidal. I rang Kelly in bits and she picked me back up, helped me put myself together again.”

With Kelly’s encouragement, Susan got a tutor and studied hard. She got in. “I wasn’t due to see Kelly for more than two weeks when I told her the news and she dropped round a card and handmade present to say well done,” Susan recalls.

Susan is now at university studying occupational therapy. “I wouldn’t be alive today if it wasn’t for Kelly, and I know if she has done all this for me, there are many more people she has given a lifeline and hope to. I am eternally grateful for her.

“Nobody in my life believed I could do it, least of all me, except for Kelly that is.”

Kelly says she is humbled by the nomination, adding: “It is such an honour to be nominated, and even more so to be shortlisted.

“I always try to home in on the positive with my clients and support them back to independence. Susan and I quickly built a good therapeutic relationship.

“Even though she is very capable, caring and talented, she found it difficult to look to the future, so I encouraged her to follow her dream and I kept the positivity going when she found that hard. Her hard work, ability and dedication have led to her achieving her goal and am so very pleased for her.”

“She is an inspiration to all of her nursing colleagues for helping her service user turn around her life.

‘Excellence in psychiatric nursing care is not always acknowledged and it is fantastic that Kelly’s excellent care has been acknowledged through this nomination. We wish her every success in the public vote.”

Voting is open from April 1 to 29. Vote online, by text or phone call.

To vote for Kelly:

*Call costs vary according to the caller’s network