Ellie, 16, has been talking to BBC Radio 1 (presenters pictured above) about her experience of gender. 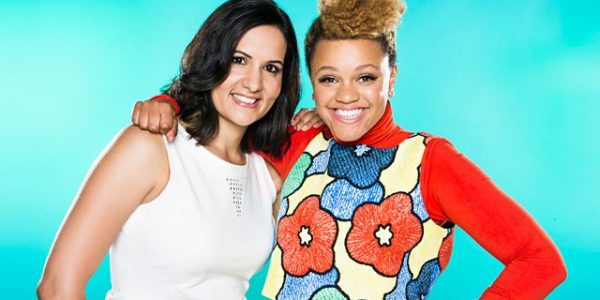 The programme will be available on BBC Radio 1‘s website.

She hopes that by helping teachers and adults who care for children understand her gender experience she can empower them to support other young people who may be reflecting upon their gender identity.

Ellie is being supported by our Child and Adolescent Mental Health Services (CAMHS) and children’s charity Barnardo’s.

My Transgender Journey
My gender is not what I look like but what I emotionally engage with.

This means that at birth I was assigned to the gender male but ever since I was very young I identified as female.

On the topic of being young, let me tell you a story of my experience of being transgender.

At around the age of five I started to notice something wasn’t right when I realised I wasn’t like the other boys.

Over time this feeling began to grow and by the time I was in year three at the age of only eight years old in my head I began to think there was something seriously wrong with me.

I became so anxious about this feeling that I began to isolate myself from other people, because I was so scared about the chance of someone finding out.

This was because I had never been told that it was okay to feel this way.

By year 4 (aged 9), it got so bad that I forced myself to do things that society sees as masculine.

An example of this was joining the school football team.

Also, because I was so anxious and generally socially awkward, I was bullied quite badly. But that is another story for another time.

Eventually, after passing the 11+ I instantly decided that I should go to an all-boys school because that way I knew that it would be near impossible for me to do anything about the fact that I am transgender.

When year 7 came I was nervous as ever.

Being around the number of boys that were there, made me realise that I had to become as masculine as I had before, in order to seem remotely normal.

I even joined the year 7 rugby team, so I could prove my masculinity, not just for others but also for myself.

But of course, due to the fact I was spending all my time trying to be my polar opposite, I started struggling with depression and anxiety, I would get panic attacks on a relatively regular basis, self harmed and had suicidal thoughts, which eventually led to an attempt on my life earlier this year.

Because of all of this I found it almost impossible to talk to other people.

Every day I would go to school by myself, go to break and lunches by myself and go home by myself.

I was never invited to people’s houses or parties, and throughout the whole of this I only had one friend.
He was, and still is one of the best things about my life.

We met at primary school and we shared all our likes and hates and he was the only person I was ever be able to truly talk to.

Sadly, recently he moved, but we do try to see each other as much as we can.

It was only Christmas last year when I then met my closest friend to date, who is also transgender but Female to Male.

He told me that it is okay to feel how I feel and that started the course of me coming out to my parents, leaving school and starting home tuition and getting in contact with a gender identity clinic.

I know there is a long way to go, but the fact that I would never have dreamed of me even still being alive, let alone having the potential to see my future is beyond incredible.

This story is one of many that you are able to prevent.

If I had learnt at an earlier age that it is okay to be transgender and that there are people like me, I would never have had to suppress an emotion I had hidden for a majority of my life.

Because of this, I believe that in both primary and secondary schools, there should be lessons that can be incorporated with PSHE that should show children that it is okay to feel like this.

Also I believe that primary and secondary schools should spread awareness about the LGBT community through events in LGBT awareness week and of communities and activities that they can engage with.

For example, gay pride and other pride events allow anyone to experience a feeling of true acceptance from a community of people who accept young people for who they are, not the labels that society puts on them.

Otherwise young people like me could go through their whole adolescence hating themselves for things that really are okay.

I am the evidence that what is going on in our schools at this moment in time is not acceptable and if this helps even one young person like me I believe it will be worth it.

I am the embodiment of thousands of stories shared by those who have felt worthless due to the emotions that they have felt.

Please help me, help us by putting these stories to an end and begin the process of becoming a society based on understanding and acceptance of others and ourselves.

Based on what I have said. Allow me to suggest some actions…
• Incorporate awareness of LGBT in PSHE lessons
• Hold an event for LGBT awareness week
• Talk about it in form times
• Make someone available to talk to students about it, if they want to
• Give advice to families if necessary, so they can start their understanding with guidance from you

There are many young people who need your help and you can affect their stories.
But this is my story, thank you for listening.

If you feel you, or someone you know, is affected by the issues raised in the show we’re here to support you.

Take a look at our young people’s website www.oxfordhealth.nhs.uk/fresh/advice/sexuality/.

Cyber attacks on the NHS