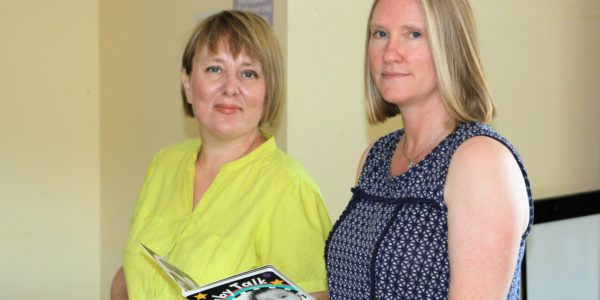 One of our health visiting teams has nearly 100 years of combined NHS experience, & health visitor Angela Cooke is one of 11 family members who works for the NHS.

Health visitor Angela Cooke (pictured left, in yellow) has worked for the NHS for 32 years – following in the footsteps of her parents and grandparents, uncle and aunt.

In fact, she is one of 11 family members who have worked for the NHS.

And with colleagues from Kidlington and Islip health visiting team, she contributes to nearly 100 years of NHS experience.

She said: “My parents and grandparents, brother and I all worked for the NHS. My dad was in maintenance, my mum in housekeeping, my granddad was a groundsman and my grandmother and aunt in hotel services, my brother is an anaesthetist, my father-in-law was a pathologist, my mother-in-law a radiologist, my uncle’s wife was a psychiatric nurse and my brother’s wife is a learning disability nurse.

“Where I grew up in Bridgend and Port Talbot in Wales there were four main institutions and the NHS was a big employer. Glamorgan School of Nursing was across the road from my house and Bridge End General Hospital behind it.

“I’ve cared for at least three generations of families..”

“I’ve never worked for anyone but the NHS and I can’t imagine doing anything else.

“I would say I’ve cared for at least three generations of families and I’m very privileged to be a part of their lives.

“I still remember the patients’ names and faces on my first ward. I was a 16-year-old naive girl, just out of school. They made such a big impact. It was a long-stay geriatric ward. One gentleman had been in the trenches and there was an older lady who thought it funny to crack obscene jokes, and another lady who loved to frighten us young girls with stories of ghosts and visions, having us run home across the grounds after shift completely spooked.

There’s been lots of changes in the NHS but nothing has changed in terms of the human condition ant the tapestry of life.

“It is difficult to quantify specific achievements. It is not about solving the world’s problems but making lots of small steps to make people’s lives better, the daily achievements of leaving someone in a better place. It all adds up to a big achievement over time.

“I love my job and all the different people and characters I’ve met, looked after and worked with over the years. The NHS, with all its ups and downs, is an amazing creation that has delivered healthcare to all regardless of status for 70 years – that is something to feel really proud to be part of.”

I have worked in the NHS for just over 25 years starting in 1992 as a temp secretary for the NHS Secretarial Bank working at the Radcliffe Infirmary, Warneford Hospital, Churchill and the John Radcliffe Hospital for about a year before taking up a permanent post in July 1993 as PA to the Purchasing Director for Oxford Health Authority.

In 1994, I started working as Secretarial Assistant in the Chairman & Chief Executive’s Office of Oxfordshire Health Authority, as it was then known, and in September 1997 I left to go travelling around the world.

When I returned from travelling at the end of June 1998, they had kept my job open and asked me to come back which I did within 2 weeks of returning to the UK!

In 2002, after returning from maternity leave, I was transferred to the South West Oxfordshire primary care trust in Abingdon, after the Health Authority changed to primary care trusts (now replaced by clinical commissioning groups – ed).

Here I worked as PA to the prescribing team for five years until again yet more change in the NHS and the offices moved to Jubilee House in Cowley.  I did move with them to begin with but found the commute from Witney too much, so I applied for another job back in Abingdon working for Continuing Care as  Shared Care Administrator.

I spent 10 years in that job which I thoroughly enjoyed, arranging care packages for people at home and coming out of hospital and working with a really lovely team.

In June last year, things changed again for me and I wanted something closer to home.  I am now working  part time as Administrative Support Worker for the Kidlington & Islip Health Visitors in Kidlington and have been really lucky to find another extremely friendly and supportive team to work in!

My journey through the NHS has been varied and I have worked with some amazingly hard working, passionate and kind people and am grateful for all the experiences & friendships I have gained along the way.

My Mum was a qualified nurse and worked at the Middlesex Hospital in London, after she qualified in the early 1960’s but also in Montreal and Vancouver in Canada for a couple of years before moving to Oxford in 1969 and working in a hospital setting but later on as a District Nurse in East Oxford.  My Aunt was also a qualified nurse who worked for the NHS too!

Find out more about our health visitors.

Find out more about how you too can build you career with the NHS.

Read more of our NHS70 stories.

July 30: COVID-19 info: Get a first or second vaccination, walk in clinics, getting tested and staying safe