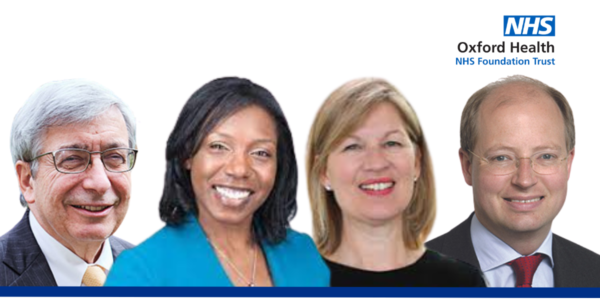 New appointments to Oxford Health’s board

A distinguished former permanent secretary, the head of an Oxford college, a highly experienced NHS hospital manager and a corporate lawyer are set to join Oxford Health as it refreshes and renews its governing board.

Each appointment has been approved by Oxford Health’s council of governors, which is elected to represent patients, staff and the public and, subject to final checks, all four will take their positions in the new year.

“We are strengthening our board in preparation for the creation of a new integrated care system in Buckinghamshire, Oxfordshire and West Berkshire in April 2022. We are determined that mental health and community services play their full part and residents have access to the highest quality care.

“It is a tribute to the reputation and potential of Oxford Health that we have been able to attract such outstanding candidates to our board. Together they will bring new energy to our ambitions and build on the work of Bernard, who leaves us at the end of the year, and Sir John, who leaves in April. Both have shown dedication and commitment during their long association with our organisation, for which we are thankful.”

“As one of England’s larger mental health and community trusts, serving a population of more than two million, our new executive and non-executive director appointments strengthen the determination to provide outstanding care, as we emerge from the pandemic.

“We are confronting the challenges of demand for child and adolescent, autism and learning disability services, while our new strategy for community services in Oxfordshire offers a new basis for helping residents young and old.”

With around 7,000 staff and a budget of over £450m, Oxford Health provides a range of physical services for people in Oxfordshire, from district and school nursing, to a range of therapies, minor injury units and specialist stroke rehabilitation.