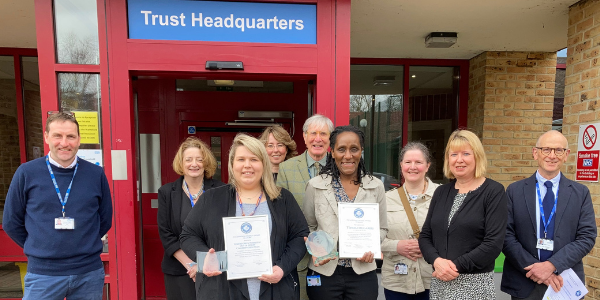 No job too big or small for February exceptional winners

Going above and beyond was truly celebrated on Monday when February winners of Exceptional People Awards received their prizes. The individual award went to Tendai Mugariri, Witney EMU Clinical Lead, whose nomination said no job is too big or small to her. And the same can be said of team winners Warneford & Whiteleaf Out of Hours Co-ordination Team, who ‘leave no stone unturned to make sure parcels get to the right place’.

The awards ceremony at the Trust HQ at Littlemore was opened by Trust Chair David Walker who expressed what a pleasure and privilege it is to recognise the Trust staff.

“All our staff are exceptional, but we believe it is worth acknowledging those who are extra exceptional and go above and beyond. We hope it will send a message that we can recognise our people and their great work even as we know that the stress and pressures continue,” he said. 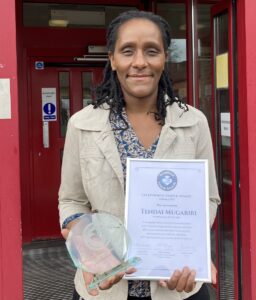 Witney EMU Clinical Lead Tendai Mugariri didn’t initially believe the award for her rather than her team.

David thanked lead governor Mike Hobbs and his fellow governors for bringing in views from the wider community and working as a panel to select the individual award winner each month. Mike said:

“This is indeed a privilege and one of the very nice tasks for being a governor.”

He then read our Tendai Mugariri’s nomination, which had been submitted by her colleague, registered nurse Jayne Treleaven at the Emergency Multidisciplinary Unit (EMU).

“Tendai is an exceptional clinical lead. She leads by example. No is job too big or too small for her to do,” it started. As an example: during the pandemic staff at Witney EMU had to mop the floor between shifts – Tendai was always happy to take her turn,” she wrote.

The nomination also noted Tendai’s dedication for patient care and supporting staff at the EMU. Those present at the ceremony at Littlemore wholly agreed with the nomination. Clinical Director Pete McGrane said:

“I’ve known Tendai for a long time and I can say, if I was ill, there’s no one I’d rather have look after me than her.”

“There’s bravery in leadership and Tendai has that. She will always tell me what I need to hear rather than what I want to hear. A huge thank you for that.”

Chief Nurse Marie Crofts confirmed that Tendai does indeed take her turn with the mop:

“I can completely echo Pete’s words. And another thing I would say Tendai is completely genuine. She doesn’t recognise that anything about her work is exceptional.”

This was certainly reflected in how Tendai reacted when she learnt about her win: she thought it was a mistake! When the Communications Team let her know about her win, she she emailed back:

“I can’t think of anything exceptional that I have done on my own. It’s always teamwork. I am just thinking that maybe the person or the people meant Witney EMU which is a team I lead. I hope I am not sounding odd! I am excited but can’t help to think this is for the team, not me personally,”

At Littlemore, the visibly moved Tendai was then presented with the prizes: an engraved glass trophy, a certificate and £50 voucher to treat herself. 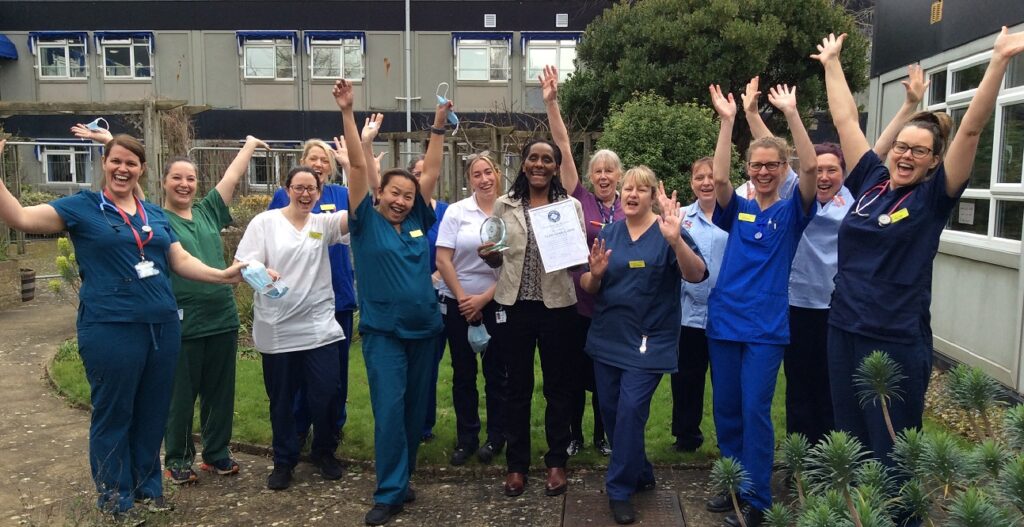 As soon as Tendai got back to Witney, the whole team erupted in celebrations for her. Team administrator Maggie Newton sent the pics and wrote:

“The Team are thrilled that Tendai won February’s Exceptional People Award. We all agree she sooooooooooo deserves it!” 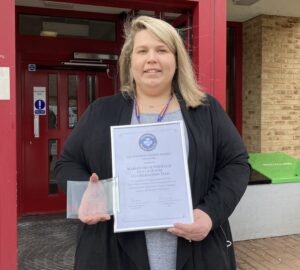 Acting Out of Hours C0-ordination Centre Manager Emma Smith received the award on behalf of the teams at Warneford and Whiteleaf.

Warneford & Whiteleaf Out of Hours Co-ordination Team are known to many as the switchboard or reception, and it is easy to over-look what a complex operation they run. Acting Manager Emma Smith received the award on behalf of the teams, presented by Director of Corporate Affairs Kerry Rogers. Kerry read out the nomination and invited Emma to describe the co-ordination team’s work.

“We are a 38-strong team and the first point of communications to all of the Trust. The reason my colleagues couldn’t be here is we do shift work and have 103 rotas!”

As if managing the phone lines wouldn’t be a task enough, the Our of Hours Team have many other serious responsibilities. They look after many wards’ fire alarms and are fully engaged in emergency planning, including how phone lines would be redirected in case of a fire or any other emergency.

And of course, the team deals with parcels and post, no mean feat in itself. As their nomination states:

“Their excellence is also demonstrated by their leaving no stone unturned in trying to direct items of post to the correct recipient, even when the address is just ‘The Warneford Hospital’ or ‘Whiteleaf Centre’.”

Emma Smith has been with the team for seven years and said:

“I absolutely love it; it’s a privilege. Although sometimes at three o’clock in the morning you wonder!”

The team winner is selected by a panel from the Trust executive team and receive an engraved glass trophy, a certificate and a £100 voucher. 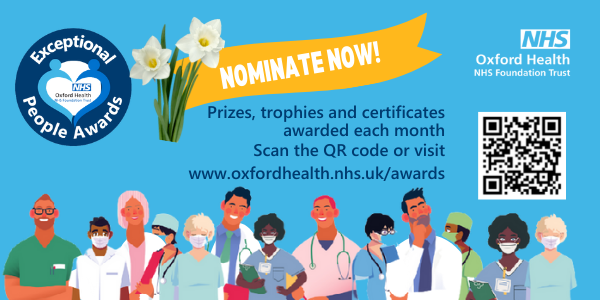 Put the spring in someone’s step and nominate them for the Exceptional People Awards! Closing date for March submissions is March 16.