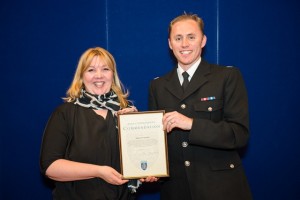 A nurse committed to working alongside police officers in a ground-breaking scheme has been recognised for her dedication.

Kathy was integral to the creation of the Street Triage scheme in Oxfordshire, which sees mental health professionals working alongside Thames Valley Police officers on patrols.

The service works to identify pathways for people presenting with mental health difficulties that come through Thames Valley Police. The scheme’s objectives are to reduce the number of Section 136 orders and enhance closer working with police and the NHS to increase knowledge, awareness and experience.

In a statement, Thames Valley Police said: “Kathy’s enthusiasm and commitment are testament to her dedication in helping people who suffer from mental ill health.

“During the pilot of the triage scheme from 31 December 2013 for one year, there was an 85 per cent reduction in the use of custody as a place of safety.”

Kathy said: “I was incredibly nervous attending the ceremony. I felt immensely honoured that the police nominated me in the first instance, and very proud to receive the recognition.

“We all work very hard, but to be given a commendation for our efforts is very humbling.”

A positive future for people with chronic fatigue syndrome/ME