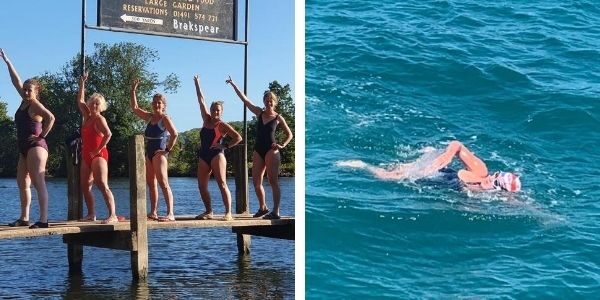 Oxford Health nurse Fiona Print and her relay team, ‘the Henley Mermaids’, have raised more than £27,000 for charity having successfully completed a Channel sea swim.

The relay team of five ladies, all in their 40s and 50s, had to wait for lockdown restrictions to be lifted and the tides to be right before they could make the attempt. After weeks of waiting they finally set off from Dover Harbour at midnight on 21 July.

Mother-of-four, Fiona, works in a busy rapid access care team of nurses, doctors, paramedics and other skilled therapists, offering Oxfordshire patients care in their own homes to avoid unnecessary hospital admission. In the lockdown, she has been supporting the Witney Community Hospital’s Emergency Multidiscipinary (EMU) Unit and Hospital at Home teams.

“Last year we completed the Thames Marathon a 14km swim from Henley to Marlow. This year, we set our sights on the Channel swim but with travel restrictions during the lockdown the team had very little sea swimming preparation.” Fiona said.

The team were all used to braving freezing river temperatures sometimes up to 16C cooler than the Channel in June. But despite the fabulous weather and warmer waters, it was not all ‘plain sailing’.

On the day, the team contended with nerves, rough waters, jellyfish as well as some unidentified swimming objects!

“It was like being in a washing machine! We were all stung by the jellyfish, which felt like a nettle sting, but we got used to it. I also felt something kick me in the leg, but I just tried to ignore this and keep going,” said Fiona.

The ladies swam in strict one-hour rotations, observed by an official from the Channel Swimming Association. Rules included not touching the side of the boat at any point during their rotation as well as sticking to the same swimming order.

“I had to adjust to breathing to the right-hand side, where the support boat was always positioned, so I was less likely to get a lung full of sea-water!”

“We packed loads of food but didn’t eat much at all. I just made sure I had medication stay on top of the seasickness.” She added.

The swim was 23 miles long in total and took the ladies an incredible 17 hours and 43 minutes – a remarkable achievement considering that over 40% of attempts end in failure.

With COVID-19 restrictions to obey, only one of the team was able to touch the ground in France. But Fiona recollects the moment when her Irish teammate Joan reached the sands of Wissant beach and was greeted and cheered in by a large crowd of locals on the beach.

“It was a fantastic end to an amazing day. We all feel very privileged to have been able to complete the crossing. It was so lovely being able to watch the sun rise and the sun set.”

Fiona has received many accolades for her fantastic achievement from her colleagues around the trust, including Community Services Director Emma Leaver who hailed her ‘a legend’!

The team’s fundraising total continues to grow, and now stands at over £27,000 as monies have poured in from generous sponsors and supporters. Some of them had followed the team on the BCA tracker and stayed in touch via their Whatsapp group.

All the money will be going towards Henley Music School, a charity founded by team member Laura Reineke, which provides music tuition for anyone regardless of age, ability, background and means. The school term begins this September and continues with online lessons.

When asked what next, Fiona said the team’s goal for 2021 will be the ‘Scilly Swim’, a 15km swim between the Scilly Isles in the freezing Atlantic Ocean.

If you would like to donate to the group’s fundraising, it’s not too late. You can still visit their GoFundMe page: www.gofundme.com/f/laura039s-campaign-for-henley-music-school