Ollie won the accolade at the Oxfordshire Community and Voluntary Action Awards. 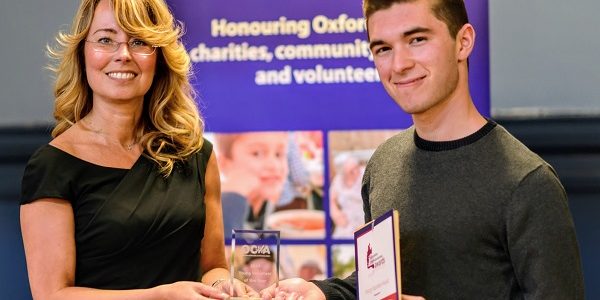 Ollie, 18, was presented with a certificate and medal by the High Sheriff of Oxfordshire, Jane Cranston, and was joined at the event at Oxford’s Town Hall by the trust’s secretary Kerry Rodgers (pictured on left, with Ollie on the right; picture courtesy of Justin Wyllie).

Ollie received the award for his long-standing volunteer work at Lady Nuffield Home in Banbury Road, Oxford. Since September 2014, he has been joining older people for activity sessions at the home.

He will shortly be heading to University in Brighton to study medicine.