“You and me. Outside.” – find out what the smoking cessation team said at our recent Health Matters talk 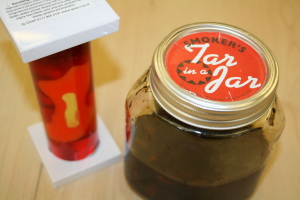 Tar inhaled by a 20-per-day smoker in one year – don’t make it a family tradition.

If you are a smoker who is not yet ready to quit, you may not realise the effects that your smoking has on your surroundings and the people you spend time with.

Your friends, family – especially your children – and even your pets are inhaling the invisible, toxic chemicals contained in cigarettes, possibly on a regular basis. Ready to quit or not, you can make a choice to protect others now, simply by taking your smoking outside.

In August, Health Matters was joined by Sue Bolton and Fiona Ruck, smoking cessation specialists from the trust’s Oxfordshire Smoking Advice Service who are campaigning for smokefree homes and cars. Whether you are a smoker or not, you will probably be aware of some of the 4000 chemicals that a smoker inhales while using tobacco products, through a cigarette, cigar or even a flavoured shisha pipe.

However, it is the sidestream smoke from the end of the cigarette (the smoke that doesn’t enter the smoker’s mouth) which contains most of these toxins. In your home and in your car, even with doors closed or windows open, these invisible toxins are affecting the people and animals around you.

So what is it that we are inhaling via second-hand smoke? Well, for starters, there’s ammonia and acetone, perhaps better known in the household as toilet cleaner and nail varnish remover.  Candle wax, vinegar, battery metal, BBQ lighter, rat poison and bleach are just a few more you might recognise from a very long list. Inhaling these substances has a more severe effect on children simply because their small bodies inhale more per kilogram than adults. Up to 40 cot deaths (sudden infant death syndrome) are caused every year due to babies being exposed to second-hand smoke, not to mention the 8,494 children aged 0 to 14 years old who are admitted to hospital each year with the effects of second-hand smoke.

Just because you can’t see the effects of second-hand smoke, doesn’t mean they aren’t happening. Children are 90 per cent more likely to smoke when they grow up if both of their parents are smoking, showing that smoking around your children also has a psychological effect on their perceived normality of smoking. Taking your cigarette outside shows children and young people that they shouldn’t mimic your habit and that smoking is not a normal part of growing up. As Sue and Fiona explain, “It’s like telling your child not to swear when you swear in front of them.” 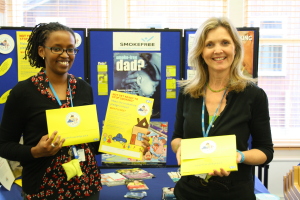 “You may not be ready to stop smoking”, they continue, “but you may be ready to make a positive change. How about changing where you smoke and taking it right outside?” You can reduce the chance of your children developing the same health issues that smokers are susceptible to, such as asthma, heart disease and even cancer, simply by smoking somewhere else. Make the pledge and join the smokefree project by going to www.smokefreeoxfordshire.nhs.uk or email smoking.advice@oxfordhealth.nhs.uk. The Oxfordshire Smoking Advice Service can support you through your choice to take smoking outside and can also help you if you think you are ready to quit. If you would like to talk to someone directly, please call 0845 40 80 300 or 01865 787 165.

Our phone numbers are changing

Creating with Care: Celebrating a year of arts in community hospitals

Changing the world, one baby at a time

The Flyer Programme takes off!