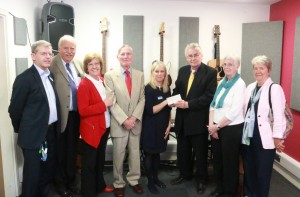 A cheque for £106,401.33 was handed over by Oxford Hospital Services Charity (OHSC) to staff at the unit, bringing to a close more than 50 years of charitable work helping the county’s health services.

The cheque was presented to the unit by OHSC chairman Tim Pocock, alongside OHSC’s longest-serving member and ex-chairman David Buckle, who the music suite is named after.

Members of the OHSC, also including treasurer Sally Hemsworth and long-serving member Maddy Radburn, were shown around the bespoke unit by two current service users, along with Oxford Health NHS FT (OHFT) chairman Martin Howell and non-executive director Dr Anne Grocock, who is also the chair of the OHFT Charity Committee.

Those who attended reminisced about hard hats and architectural drawings from the days before the Highfield Unit was opened in 2012 and the tour concluded in the David Buckle Music Suite where Stuart Hobbs, the Highfield Unit’s music therapist shared some of the service users’ recent music.

Chairman Tim Pocock said it was a bittersweet moment for the charity after 51 years and this was the final of over £1.5million of donations towards equipment not normally included under NHS budgets.

“Of all the projects we’ve done this one has had the greatest effect and response from the young people. It’s heart-warming to see the money is genuinely going towards a good cause,” he said.

“We thought we would go out with a bang and empty our coffers into your coffers as our final act.”

Sarah Firth, ward manager at the Highfield Unit, said: “The music created here is inspiring. Thank you for supporting us and the young people here.”

The bespoke suite offers the young service users the opportunity to create and record their own music and has inspired many of the young people there, including one who has since gone to study music at college.

The donation will continue to fund the music suite in the future and help to pay for additional and replacement equipment, as well as professional musicians who come to the Highfield Unit to work with the young people staying there.

Martin Howell, OHFT chairman added: “At Oxford Health NHS FT we strive to innovate and provide the very best service that we can. Your donation enables us to do something that we couldn’t otherwise have done.”

The David Buckle Music Suite was opened by Her Royal Highness The Countess of Wessex in 2012 and was created following a generous donation of £276,592.54 from OHSC.