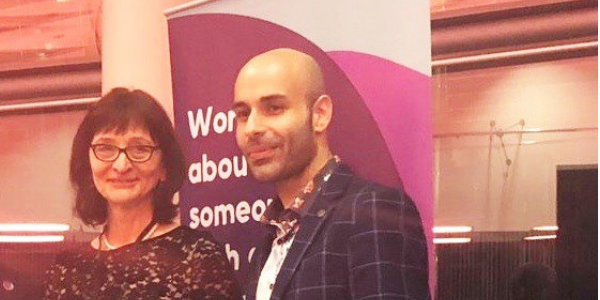 Oxford Health doctors Agnes Ayton and Ali Ibrahim were presented with the Beat Research Impact Award on Wednesday, 31 October for their research on the lack of eating disorder training for medical students.

Their work revealed that medical students receive less than two hours of training on eating disorders over four to six years of undergraduate study, putting patients’ lives at risk, according to experts and Beat.

The research also highlighted the severe lack of specialist training posts, with just 17 such posts dedicated to training clinicians to treat eating disorders.

The lack of training placements offered by universities means that just one percent of doctors have the opportunity to gain clinical experience with eating disorders. The earlier that medical professionals recognise the signs and symptoms, the sooner sufferers of eating disorders can get help.

A boost to improve training

Beat’s Chief Executive Andrew Radford said: “Dr Ayton and Dr Ibrahim have been instrumental in providing impetus to improve training for the doctors who could stop eating disorders in their tracks.

“Following the research of Dr Ayton and Dr Ibrahim we have launched a campaign calling on the General Medical Council to review training of eating disorders for junior doctors as recommended by the Parliamentary and Health Service Ombudsman.

“Only with adequate training covering the psychological and physical aspects of these serious mental illnesses can doctors protect patient safety.”

Dr Ayton, lead author of the study, said: “We are delighted to have received the Beat research impact award.

“Eating disorders have the highest mortality rate of any psychiatric illness, yet as a consequence of the lack of training for doctors, sufferers are delayed in receiving help, and in some cases are even turned away from health care services.

“We have been meeting parliamentary representatives and hopefully with the help of Beat and the General Medical Council will help make changes that could save lives in the future.”

We want your opinions on mental health. Please spare 5 minutes to complete our anonymous survey and make a big impact.