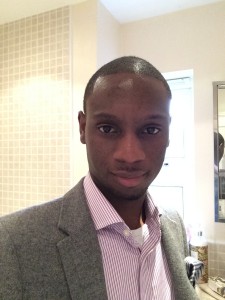 A promising newly qualified nurse at Oxford Health NHS FT has been named a “rising star” by the Nursing Times.

Ayodele Ayedun, who works as the deputy ward manager on Sapphire Ward at the Whiteleaf Centre in Aylesbury, was named on a list of just 25 nurses from around the country.

The Nursing Times initiative was created to acknowledge students training to be nurses, or those who have qualified in the last five years. A judging panel, including the Chief Nursing Officer for NHS England, chose people they believed would be the “innovators, ambassadors and advocates” for the nursing profession in the future.

Since he qualified two years ago, 30-year-old Ayo has developed from a newly qualified nurse to an inspirational charge nurse at the Whiteleaf Centre.

Colleagues particularly complimented his positive attitude, empathy and commitment to providing dignified and compassionate care to all of his patients.

The judging panel said: “Ayodele has flown through the ranks in a challenging area of practice and exhibits great professional maturity in the way that he interacts with both patients and colleagues.”

Ayo said: “I am humbled by the narratives of the patients we nurse and I continue to be inspired by their courage, strength and hope despite the obstacles and adversities life appears to throw at them from time to time.

“On Sapphire Ward we strive to maintain a positive attitude towards exploring and identifying how we can further improve our service delivery.

“I feel incredibly humbled and privileged to have such recognition – even though I believe it is more a reflection of the support and guidance from the team as a whole.”

Adult Directorate director of nursing, Sue Haynes, said: “The Rising Stars initiative is all about identifying colleagues who can implement new, more efficient and more quality driven initiatives, who exhibit the values we want to see in our nursing profession and can innovate services to meet patient need.

“Ayo has met all of these challenges and on behalf of his colleagues in the adult directorate we would like to offer our warmest congratulations and well wishes on being recognised for his contribution to his patients, his team and his profession.”