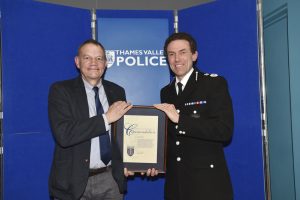 A consultation psychiatrist from Oxford Health NHS Foundation Trust has been commended by the Chief Constable of Thames Valley Police for bringing mental health issues into focus within the criminal justice system.

Dr David Thurston, from the Oxford City and North East Area Mental Health Team (based at the Warneford Hospital in Oxford) has been recognised at a Commendations Ceremony.

Chief Constable Francis Habgood said: “I would like to pay tribute to Dr Thurston, who has played a key role in criminal justice in relation to mental health issues and exemplifies effective partnership working between our Force and other agencies. I feel privileged to be the one giving these Commendations and he and each and every one of the recipients should feel very proud.”

The commendation recognises Dr Thurston’s contribution to the development and running of the Criminal Justice Mental Health Panel for Oxfordshire. He was instrumental in setting up this panel, which deals with issues that crop up during mental health assessment in custody.

He was described as an “exceptional example” of supporting the Force’s Values and Policing Principles in protecting communities, working with police and partner agencies to develop strategies that help vulnerable victims through the criminal justice process.

The Criminal Justice Mental Health Panel has grown and been renamed since it was established in 2002: it now consists of members from relevant partner agencies in Oxfordshire, who have joined forces to tackle the complexities of dealing with suspects who have mental health conditions.

Nicola Dubay, Thames Valley Police’s Senior Evidential Review Officer for Oxfordshire, said: “Dr Thurston has been invaluable as a contact to the police: his authority and ability to obtain information from his colleagues has allowed cases to progress through the criminal justice system efficiently. His commitment and motivation has led to this very successful venture.”

Dr Thurston was among police officers and members of public who received commendations for a variety of reasons from the Chief Constable at a ceremony held at Holdsworth Hall, at the Force Training Centre in Sulhamstead, Reading, during the week beginning 2nd May 2016.