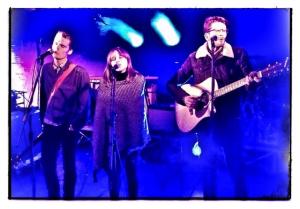 The crowds packed into Oxford’s Isis Farmhouse besides the River Thames on Saturday for a music festival to raise funds for the trust’s Highfield Unit.

The day-long event organised by Stuart Hobbs, who runs music sessions at the adolescent mental health unit in the ground of the Warneford Hospital, was arranged to raise funds for therapeutic activities for the patients being treated at the cutting edge unit.

The day saw acts including Rory Evans, Clarke & Moore, Jess Hall, The Talc Daemons, Peerless Pirates, ToLiesel, Family Machine and Oxford supergroup BURNINGBeeS –fronted by Stuart Hobbs himself and accompanied by John Halliday from the Candyskins, Simon Williams from The Samurai 7, Spike Holifield who has played with Sinead o’Connor and Nic Moorbath formerly of Ride and founder of Oxford nightspot the Zodiac.

Rounding off the evening was up-and-coming sibling two-piece Hudson Taylor, who surprised the assembled crowd when they invited chart-topping Power of Love singer Gabrielle Aplin on stage with them to join in with a rendition of Cosby, Stills & Nash’s Helplessly Hoping.

In total, the event managed to raise more than £1,200 for the unit.

Speaking after the event, organiser Stuart said: “I’d like to thank all the bands and crew, Jonathan and Jane at the Isis Farmhouse for letting us have the venue free, and of course everyone who came along and made the day such a great success.

“We had to carry two tonnes of gear across Iffley lock and along the towpath in the rain to set up on the day and it brought out a great spirit in the crew, and when the sunshine made an appearance just in time for the kick off at 3pm it brought out a really lovely vibe for the start of the festival.”

These sentiments were echoed by Alfie Hudson Taylor, who along with his brother Harry played their Radio 1 record of the week single Chasing Rubies and a haunting cover of Nirvana’s Come As You Are.

In fact the two brothers were having such a great time their set ran over by 15 minutes, causing a frantic dash back along the towpath to a waiting taxi to try and catch the last train back to London to meet their band for the journey to Cardiff where there they support Jake Bugg on his UK stadium tour.

Before he dashed off, Alfie said: “There has been some really great music today and it’s been such an amazing event for a totally worthwhile cause. We are very proud to have been part of it all.”