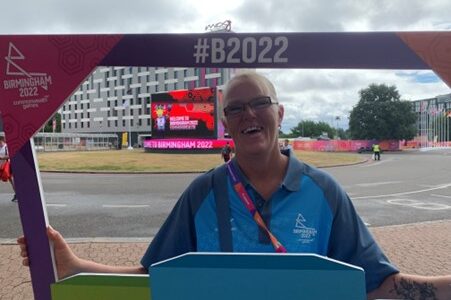 When she was seven, Kelly Gardner went along with her parents who were volunteers at weightlifting events for disabled people.

She soon became the unofficial mascot for the British team, travelling around with them and developing a love for the sport.

Fast forward to 2022 and she has just come back from the Commonwealth Games where she was invited to be one of the referees in the Para power lifting event.

And she now has her sights firmly set on being one of the officials at the Olympic Games in Paris 2024.

Kelly who is a facilities support manager at the Whiteleaf Centre in Aylesbury said:

” I had a marvellous time. It is very hard work and the team of referees and officials worked from early in the morning to late in the evening to make sure the event followed all the rules and regulations and ran smoothly but I wouldn’t have missed it for the world.

“I actually had a gall bladder operation two weeks before I went but I wasn’t going to let that stop me – I love refereeing these events.”

Her parents progressed from being volunteers to qualifying as referees and in 2013, Kelly decided she would follow in their footsteps and passed her Para power lifting referees exam.

The following year she refereed at the Invictus Games in London where she met Prince Harry and she has been involved in events ever since, notching up a total of 15 to date. One of the things Kelly finds amusing is the attitude of some able-bodied people who think the sport looks easy.

“They have no idea just how strong the athletes are; they have amazing upper body strength – I struggle to even lift the bar let alone with weights on it. It really is not as easy as some people think.

“As an able bodied person myself, I encourage others to watch Paralympic sport as the athletes really do not get enough recognition which I find frustrating,” she said.

Kelly, who lives in Aylesbury, has worked in the NHS for 21 years, starting out as a receptionist. She has had a lot of support from her colleagues who are all very proud of her achievements and she was deluged with messages from her family during the Commonwealth Games as they had seen her on TV.

Her role as referee involves being part of a team of officials, ensuring all the rules, regulations and processes are followed from officiating at the weigh in to watching the athletes during a lift to ensure they meet all the technical demands of the sport.

Although she has not been a weightlifter, Kelly likes sport and enjoys swimming and going to the gym. She said:

“My parents have both retired from refereeing but I have picked up the baton from them and my aim is to get a few more national events under my belt to boost my experience then hopefully, next stop Paris 2024!”