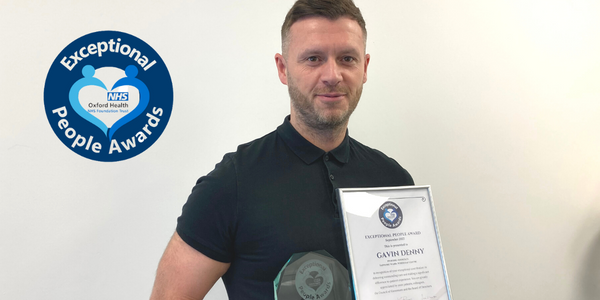 “This is wonderful news. I am absolutely thrilled,” said Gavin.

Gavin received his award in a small, cheerful ceremony at the Whiteleaf Centre from Chief People Officer Charmaine De Souza and Trust Governor Jacky McKenna, with many of his team members joining in. 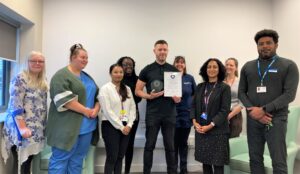 Gavin had been nominated by Physical Health Lead Matron Alison Murray, who noted his calm, respectful approach and exceptional skills in de-escalating situations where a patient could be distressed and aggressive. Alison wrote:

“Gavin has a really nice manner with staff and patients, which puts everyone at ease and encourages others to adopt his approach.”

Gavin has worked at the Sapphire ward for seven years and loves his job. He is currently working towards qualifying as a nurse and plans do a preceptorship, with the ultimate aim to become a ward manager. He told he comes from a family of mental health professionals but came himself to the field later in life, after having a career at a gym and later as a plasterer.

“To say I disliked plastering is an understatement!” he laughed.

Going to the uni in his age didn’t appeal to Gavin, so he applied to become a nursing associate.

“I know it sounds cheesy but when I got the job, I felt this is what I’m meant to do.”

“I absolutely want to work on the ward and be the kind person on the ward. I am a calm character and if there’s a situation, I will first talk; ask what’s going on for that person and keep talking. Restraining is a last resort to me,” Gavin said.

“We don’t often get positive feedback on the ward, so when a patient says: ‘you know, you are actually quite good at your job’, it’s the greatest feeling for me.”

Charmaine and Jacky McKenna praised Gavin for promoting the Positive Engagement and Caring Environments (PEACE) approach both through his own example and as a PEACE Champion and were delighted his good work is now recognised in the awards. Jacky, who is in the Governor panel judging the individual awards, said:

“You were against some stiff competition, but we absolutely wanted to recognise all the good work you are doing.”

As a winner Gavin was given a certificate, an engraved glass trophy and £50 gift voucher. Apparently his teenage children are already after the voucher – but Gavin grinned:

“I think I’ll treat myself!” 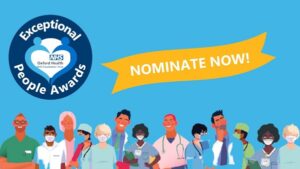 Have you come across someone special or a top team at Oxford Health? Whatever their role and contribution, we want to hear about it! Nominations for exceptional people and teams are welcome at any time from patients, carers and service users, their families and all Oxford Health colleagues. Nominate online here.