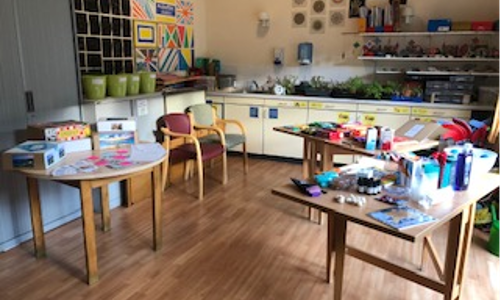 A new initiative on Sandford Ward at the Fulbrook Centre has brought personalised self-soothe kits to support patients in distress.

Self-soothe boxes, also called crisis boxes, hope boxes, distress tolerance kits or emergency boxes, can contain anything that can help distract or soothe someone who is feeling distressed. They can be entirely personalised and are filled with items that can help someone to feel better such as calming scents, a favourite food, or activities to focus on.

Sandra Diesel and Rachel Prosser who worked on the project to bring the boxes to Sandford ward explained their motivation:

“We felt that a personalised self-soothe kit could be a really helpful tool for some of our patients when they are discharged from hospital, so set up a self-soothe box project on the ward.”

Sandra, Rachel and their colleagues first encountered self-soothe boxes at Oxford Health’s annual HealthFest event in 2019 where a stall was providing visitors with the opportunity to assemble their own kit. Inspired by this the team began to research whether something similar might be beneficial to patients on Sandford Ward, a 14-bed inpatient ward for older adult men with acute mental health difficulties and/or cognitive impairment.

The first group of patients involved with the project made their own self-soothe boxes.  Feedback from the  pilot was overwhelmingly positive and prompted the team to explore continuing the offer to future patients, and to look in more depth into patients views and experiences of making/using self-soothe boxes.

They created a three-session plan to run the self-soothe box group and designed some measures to look at how much patients enjoyed each session..  Patients were first introduced to the concept of the box and supported to choose items for their own boxes. At a second session they were reminded about the boxes and invited to decorate their own box. At the final session patients were helped to fill their boxes with their chosen items.

Patients involved in the most recent self-sooth box project reported feeling calmer after the sessions and all said they enjoyed participating either ‘quite a bit’ or ‘a lot’.  Whilst packing their boxes patients commented how much they had enjoyed the project and said they thought the boxes would be helpful for them at home if they felt anxious or were feeling down. They said how they thought the boxes were a ‘fabulous idea’ and they hoped that patients in the future would get the same feeling of enjoyment they had felt during the sessions.

After two successful runs of the project, with positive feedback from all the patients involved, the group will now be ongoing on Sandford Ward. The team hope that  personalised self-soothe boxes will be a helpful tool for patients to use when they leave hospital as they continue their recovery.