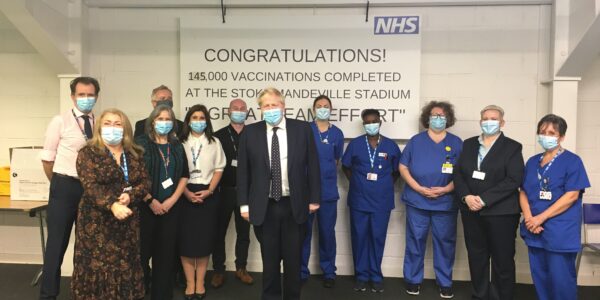 Our COVID-19 vaccination team were delighted and proud to welcome Prime Minister Boris Johnson to the Guttmann Centre in Aylesbury on Bank Holiday Monday to witness at first their dedication and high achievements in the vaccination programme.

The PM made the trip to the centre – the birthplace of the Paralympic movement –  to meet members of this tight-knit and motivated team who have worked tirelessly since jabs began there in April.

In the intervening eight months, 145,000 doses have been administered by the 70-strong Oxford Health squad, who had earlier notched up a further 22,000 vaccinations before outgrowing a site at Bucks New University.

Joanna, a former paediatric nurse who describes her role as the most rewarding of her 18-year NHS career, was responsible for guiding the Prime Minister around the centre and introducing him to some of the team.

Followed by TV camera crews and press photographers, the PM was taken to Pod 7 where nurse Connie Muasya was preparing to give 19-year-old Esther Hewitt her booster shot.

Esther, from Aylesbury, told the PM it was vitally important for her to get the maximum protection against COVID-19 as she works as a carer for young adults with complex needs.

Further along in Pod 12 vaccinator Vicky Toghill was getting things ready for her patient, dad-of-four and ex- NHS worker Mark Becher from Aylesbury who recently recovered from COVID-19

Donning a yellow smiley face t-shirt because he was ‘happy to get my booster’ shot, Mark spent several minutes chatting to the PM while Vicky expertly administered the dose.

After the tour the PM spoke with Aylesbury MP Rob Butler and signed a visitor book for site owner Wheelpower – adding his name alongside other VIPs including Her Majesty The Queen and the only other Prime Minister to have visited the site, Harold Wilson in 1971.

Jo Crawley said: “It was an absolute privilege and an honour to have been given the opportunity to show the Prime Minister around our amazing site and for him to meet a few of our fabulous team. It is wonderful for them to receive recognition for the work that is carried out here every day with such enthusiasm, care and dedication.”

CEO Dr Broughton added: “I was indeed an honour to meet the PM and I am delighted he was able to see the site in action, spend some time learning of our achievements and meet this wonderful team who have worked tirelessly to bring life-saving vaccinations to the population of Buckinghamshire, working alongside other health partners.

“I would like to echo the Prime Minister’s message to get boosted now. Whatever your age, whether you are nervous or hate needles, our team here – and at our other sites – will put you at ease and give you the greatest of care.  Getting your primary vaccinations and booster will protect you and your loved ones and the NHS. “

You can book your 1st, 2nd or booster dose against COVID-19 by visiting the NHS National Booking Service where you can make, amend or cancel a booking. 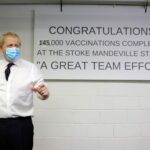 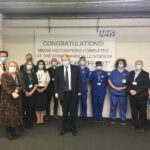 The Guttmann team with the PM 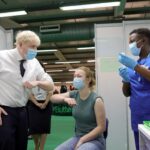 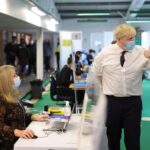 Checking things out at the check in with Joanne Manning 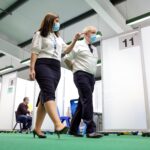 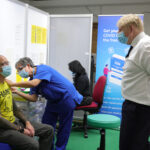