Pupils from Headington School have been baking cakes for frontline staff to celebrate the NHS Birthday. 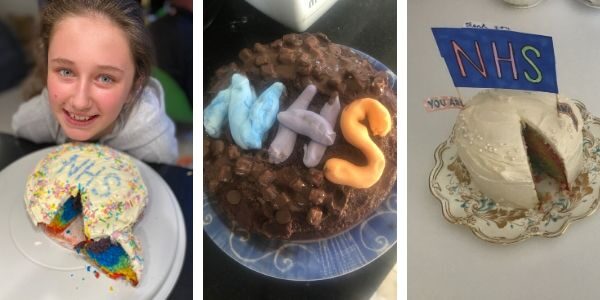 Cakes will be making their way to some of the Trust’s community hospitals and specialist teams in Oxfordshire such as Raglan House in Cowley, which supports children and young people with acute mental health needs.

The activity also concludes their Year of the Community project which began in September 2019 and reflects the school’s ongoing support for Oxford Health.

Headington School’s Year of the Community began last September at HealthFest, Oxford Health’s annual event, where they demonstrated making quirky bird feeders. Every week since then the girls aged 12-18 years have been volunteering as they work towards their Duke of Edinburgh Awards.

Pupils have also supported wards at the Warneford Hospital and Fulbrook Centre in Headington which have seen them making more bird feeders and bug hotels as well as providing seedlings for some of our green spaces.

The project finished last week with a community engagement day during which students and staff shared photos of their many activities including quilt making and creating time capsules.

Julie Pink, Community Involvement Manager for the Oxford Health Charity, said: “It has been wonderful to work alongside Headington School to support our green spaces and art projects. The young people involved have made the most of their time and have made a big difference.

“We are now working with the school to plan for 2020/21 and enable the students to support the three wards at the Fulbrook Centre.” She said.

In lockdown the girls have been taking part in virtual concerts as well as activities like poetry and writing short stories. They have also been doing community activities like litter picking and delivering food to those who are isolating in their homes.

Anisha Charania, Duke of Edinburgh Awards scheme manager at Headington School said: “The girls have been really motivated by the project and making positive changes that benefit themselves and make a difference to those who need it in the community. Baking for the NHS Birthday was just the icing on the cake!”

Julie added: “This approach is something we wish to replicate with schools across the Trust and would welcome any schools who want to get involved to get in touch through charity@oxfordhealth.nhs.uk.”

NHS 72: Happy Birthday To Us

Become a member of Oxford Health