Our award-winning project to raise awareness of dementia within the BME community culminates later this year with a play exploring living with dementia with humour and humanity. 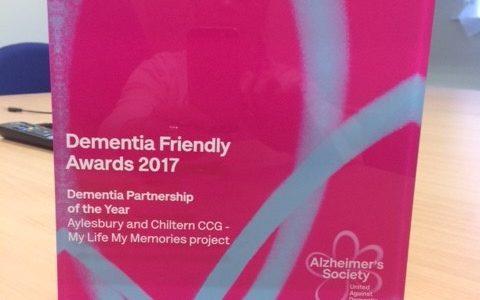 Older people from african and carribean communities are more likely to develop dementia, and do so earlier. But these communities tend to access services later, and usually in crisis.

Working with the NHS Aylesbury Vale and Chiltern Clinical Commissioning Group, as well as the Buckinghamshire County Council, our staff have been working to raise awareness of dementia in black and ethnic minority (BME) communities in Buckinghamshire.

Tara Rahim, a matron who works within our Older People’s Services directorate in Buckinghamshire, said: “This project was not just for older people, but for all those from a BME background: the project has a focus on diverse communities, rather than being age specific.

“This is because of under representation in early diagnosis and lack of awareness in local supporting services.”

Last year, the short film ‘My Life, My Memories’, created to raise awareness of dementia and encourage earlier diagnosis amongst the BME community, was named the Dementia Partnership of the year at the Alzheimer Society’s 2017 Dementia Friendly Awards.

The project was led by NHS Aylesbury Vale and Chiltern Clinical Commissioning Groups, working closely with Buckinghamshire County Council’s Prevention Matters team and Oxford Health NHS Foundation Trust, with the support of key organisations such as Carers Bucks and the Alzheimer’s Society.

The project included the creation of awareness and information videos aimed primarily at the BME community, awareness events, the creation of information resources and engagement with a number of groups and organisations to help to promote these messages. The overall success of the project was attributed to strong partnership working.

Dr Sian Roberts, Mental Health and Learning Disability Clinical Director for Aylesbury Vale and Chiltern CCGs, said: “It is a real honour for our project to have been recognised and these awards and a tremendous testament to both the hard work of the members of our team, and the great support we had from partner organisations. Everyone involved has been determined to make this project a success, and we look forward to building on the work we have done as we continue to improve dementia awareness across the BME community in Buckinghamshire.”

Tara Rahim said about the award (pictured), “I am so proud to have the ‘working in partnership’ award for this work.”

The project has also now produced two short films providing advice and guidance and highlighting the experience of people from the BME community, to help patients, carers and family members.

The project is now planning a soon-to-be released third short film, which will focus on the feedback from local communities.

As a grand finale, a theatre production of the award-winning play Finding Joy is planned for November 2018: the play approaches the subject of dementia with humour and humanity, and has performed to audiences across Europe and the UK.