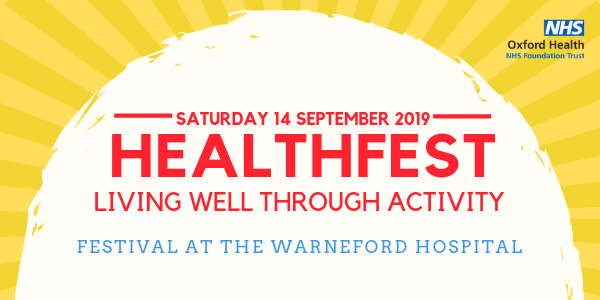 Roll up, roll up: HealthFest is back

HealthFest is making a grand return for a second thrilling year and promises to be even bigger and better.

The free family festival in a day will focus on ‘Living Well through Activity’ and will take over the Warneford Hospital site in Oxford from 11am to 3pm on Saturday, September 14. There’ll be taster sessions in art, yoga and mindfulness and much more as well as music and dance performances for all ages.

Community involvement lead Julie Pink said: “It’s our opportunity to show everyone that living well encompasses both physical and mental health activity as well as the way in which we nourish our bodies and brains with food, knowledge and community.

“And it’s also a chance for the trust to celebrate the NHS and showcase more about the many and varied mental and physical health services provided by Oxford Health. We do hope you’ll come along and join in the fun.”

From bellydancing to boxercise

Scores of charitable and community organisations from across the county and beyond will be joining us on the day, demonstrating some of the incredible support on offer in the city. Here are just some of the attractions, or see the full programme here:

Yoga Quota will offer workshops on seated yoga and meditation, and Artscape programme manager Tom Cox will be on hand to offer taster sessions.

GoodGym Oxford will run a litter pick at the meadow as a demonstration of one of the fun ways they help people keep fit. Self Love Detox will be on hand to give new mums confidence to conquer any body image issues through positive mindsets and exercise.

Aspire will have a taster boxercise and smoothie stall, while Mim’s Bellydancing will be keeping the summer feeling alive with bellydance ranging from Arabic pop to samba fusion.

Ten firefighters from Oxfordshire Fire and Rescue’s Slade Park fire station will be bringing one of their engines along – a must for any young would-be blaze buster. Smokefree Oxfordshire will be helping people quit cigarettes; the Stroke Association will be offering blood pressure testing and info and Get Oxfordshire Active will focus on diabetes and its programme of physical activities and sporting opportunities for all ages and abilities.

Students on the Duke of Edinburgh programme at Headington School will be demonstrating making bird feeders and bug hotels. There’ll be displays from the National Trust about the great outdoors, nature and conservation while the University of Oxford’s plant sciences department will be explaining about the wonders of bees. The university will also be demonstrating virtual reality kits which are being used to help people with a range of mental health problems – from fear of heights to psychosis.

Other organisations like Oxfordshire Mind, Restore, Citizens Advice, Age UK Oxfordshire, Guideposts trust and a host of teams from Oxford Health will all be represented.

HealthFest, now in its second year, is a part of Oxford Open Doors weekend (September 13-15) – an annual celebration of Oxford which gives people the chance to see behind the scenes at some iconic and historic places.

HealthFest itself is sponsored by Oxford Health Charity and embodies its aim to enhance the experience of patients, families and staff receiving care from the trust by encouraging positive activity to improve wellbeing. The charity will be raising money on the day for its current appeals supporting patient and staff wellbeing and more details on these can be found on the charity website www.oxfordhealth.charity.

In the case of severe weather, the trust reserves the right to cancel the event.