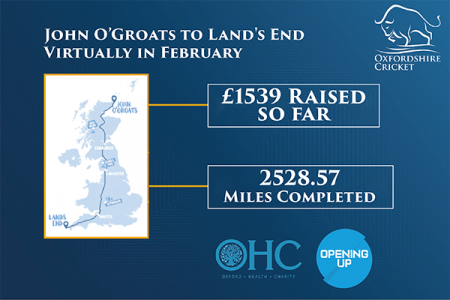 Cricketers from across Oxfordshire have got one over on Lockdown by putting their fitness to the test to raise money for charity.

As the latest restrictions meant that indoor practice was postponed and employees of Oxfordshire Cricket went into flexi-furlough the idea of a virtual journey from Lands End to John O’Groats was pitched.

The aim is to raise as much money as possible through online donations which will then be split between the Oxford Health NHS Charity and Opening Up – a cricket focussed mental health charity.

Nick Pinhol, Marketing and Commercial Manager, at Oxfordshire Cricket, said: “Once new year started the staff of Oxfordshire were only working one day a week.

“The whole idea came about with them all having a lot of free time a colleague, Ashley Rump, suggested that we needed to keep active and promote mental wellbeing by getting out and about and doing some physical activity.

“At the start we thought we would just have a few people going out and clocking up a few miles and it would take a while to do the 874 mile total. But more people got involved and pretty soon we exceeded our expectations and the total and kept on going.

“It’s great that started out as quite a small project has done so well and the support we have had from the cricketing community has been fantastic. 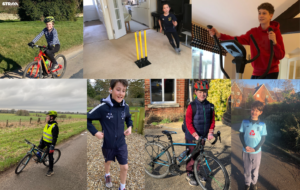 Those taking part contribute to the quest by clocking up a few miles either walking, running or cycling and this contributes to the overall total. They let their friends and family know and also how to donate.

The hope now is that people across Oxfordshire will make a contribution by donating online and helping get the total raised to £5,000 or more.

All age ranges have done their bit with those aged 10-18 who are in Oxfordshire’s pathway chipping in with 877 miles and, with spring on the way the plan is for everyone to keep going in trying to raise money. 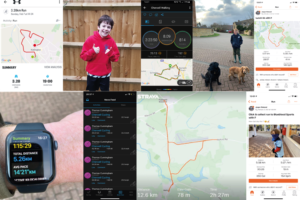 Julie Pink from the Oxford Health Charity said: “This is a fantastic achievement and it’s really good to hear that the fundraising efforts are still going on.

“Knowing that people are putting so much effort into raising money for hard working NHS staff is inspiring and makes a really big difference.”