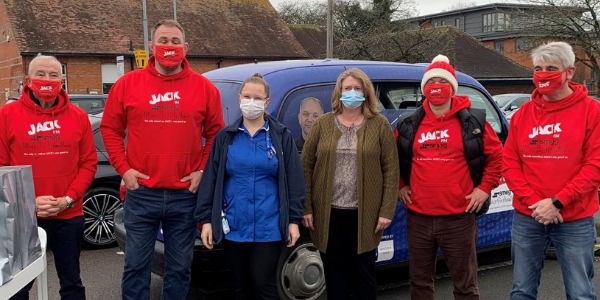 Jim and Scott’s visit was part of the Mince-Pie-A-Thon, an event jointly run by the radio station Jack FM and home appliances group Smeg. 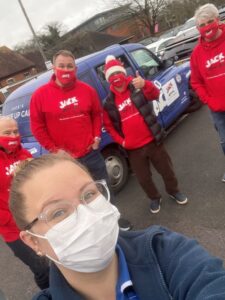 “I would hug you if I could! This is a little token from us to say a big thank you.”

“We are so grateful for everything you have done over the past months. We hope you manage to get some rest and enjoy Christmas with your loved ones.”

Some 250 warm mince pies were delivered on site, safely in the car park. Clinical Director Pete McGrane and Service Director Emma Leaver then took the pies to the various wards and departments.

“When Smeg contacted me to get involved in this event, I jumped at the chance. It was lovely to be able to share this with staff and wish them a Merry Christmas. The last nearly two years have been tough, really tough. Gestures of support like this go a long way to putting a smile on people’s faces.”

The East Oxford dental clinic in Oxford also got their share of mince pies – plus they were crowned most deserving workplace by Jack FM. The team were entered into Jack FM’s competition by Louise Cox, one of the nurses at the clinic.

The team received a merry surprise on Monday when mince pies were delivered by the radio station to congratulate them and recognise their efforts.

The dental clinic provides dental treatment and advice to our communities as part of the Oxfordshire Community Dental Service. This service offers specialist dental care to adults and children who are unable to receive care from a general dental practitioner, but do not necessarily need to be seen in a hospital.